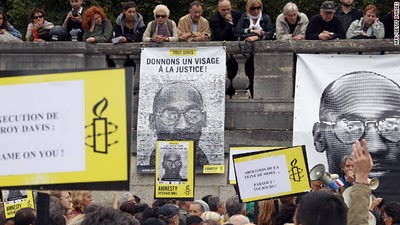 troy davis execution goes ahead despite serious doubts about his guilt

from guardian: Moments before he was put to death, Troy Davis lifted his head from the gurney to which he was strapped and looked the family of Mark MacPhail, the police officer for whose murder he was convicted, directly in the eyes. "I want to talk to the MacPhail family," he said. "I was not responsible for what happened that night. I did not have a gun. I was not the one who took the life of your father, son, brother." He then appealed to his own family and friends to "keep the faith", said to the medical personnel who were about to kill him "may God have mercy on your souls", and laid his head down again. He was administered with a triple lethal injection of pentobarbital, pancuronium bromide and potassium chloride, and at 11.08pm he was pronounced dead.