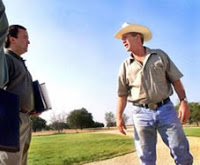 from thinkprogress: Today marks seven years since the day President Bush received a President’s Daily Brief entitled “Bin Laden Determined to Strike in U.S.” (See the pdf memo here.) At the time, Bush was vacationing at his ranch in Crawford, TX and stayed on vacation the rest of August 2001. Here’s how the administration reacted, according to the 9/11 Commission report

— [President Bush] did not recall discussing the August 6 report with the Attorney General or whether Rice had done so. [p. 260]

— We have found no indication of any further discussion before September 11 among the President and his top advisers of the possibility of a threat of an al Qaeda attack in the United States. DCI Tenet visited President Bush in Crawford, Texas, on August 17 and participated in the PDB briefings of the President between August 31 (after the President had returned to Washington) and September 10. But Tenet does not recall any discussions with the President of the domestic threat during this period. [p. 262]

The day after he received the memo, “Bush seemed carefree as he spoke about the books he was reading, the work he was doing on his nearby ranch, his love of hot-weather jogging, his golf game and his 55th birthday,” the Washington Post noted. Today — 2,557 days later — Bin Laden still remains free and “determined to strike in U.S.”