from andrew bacevich: The events of the past seven years have yielded a definitive judgment on the strategy that the Bush administration conceived in the wake of 9/11 to wage its so-called Global War on Terror. That strategy has failed, massively and irrevocably. To acknowledge that failure is to confront an urgent national priority: to scrap the Bush approach in favor of a new national security strategy that is realistic and sustainable – a task that, alas, neither of the presidential candidates seems able to recognize or willing to take up.

9/11 rumors that harden into conventional wisdom

from nytimes: Seven years later, it remains conventional wisdom [in Cairo] that Osama bin Laden and Al Qaeda could not have been solely responsible for the attacks of Sept. 11, 2001, and that the United States and Israel had to have been involved in their planning, if not their execution, too. This is not the conclusion of a scientific survey, but it is what routinely comes up in conversations around the region — in a shopping mall in Dubai, in a park in Algiers, in a cafe in Riyadh and all over Cairo.

“Look, I don’t believe what your governments and press say. It just can’t be true,” said Ahmed Issab, 26, a Syrian engineer who lives and works in the United Arab Emirates. “Why would they tell the truth? I think the U.S. organized this so that they had an excuse to invade Iraq for the oil.”

It is easy for Americans to dismiss such thinking as bizarre. But that would miss a point that people in this part of the world think Western leaders, especially in Washington, need to understand: That such ideas persist represents the first failure in the fight against terrorism — the inability to convince people here that the United States is, indeed, waging a campaign against terrorism, not a crusade against Muslims… There were many reasons people here said they believed that the attacks of 9/11 were part of a conspiracy against Muslims. Some had nothing to do with Western actions, and some had everything to do with Western policies.

landmark russian tv debate on 9/11
from webster tarpley: Thierry Meyssan reports from Moscow that he and other leading international 9/11 truth experts have completed taping a television debate which will be telecast on the first national program of Russian state television this coming Friday, September 12. This no-holds barred, free-wheeling debate, featuring strongly divergent opinions about what really happened on and about September 11, 2001, will be shown in conjunction with the documentary film Zero, produced and directed by Giulietto Chiesa and Franco Fracassi of Telemaco Productions in Rome. Russians are thus about to receive an unprecedented evening of 9/11 truth. 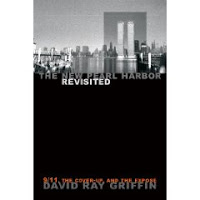 from 9/11 blogger: In 2004, David Ray Griffin published The New Pearl Harbor: Disturbing Questions about the Bush Administration and 9/11. Translated into several languages, it helped spark a worldwide movement demanding “9/11 truth.” Even as it became increasingly outdated, it continued to be widely cited as the best introduction to the issues.

Griffin has now written The New Pearl Harbor Revisited, which provides a chapter-by-chapter updating of the information provided in that earlier book. It shows that the case against the official account constructed by independent researchers—who now include architects, engineers, physicists, pilots, politicians, and former military officers—is far stronger than it was in 2004, leaving no doubt that 9/11 was a false-flag operation, designed to give the Bush-Cheney administration a pretext to attack oil-rich Muslim nations.

Taken together, these two books provide everything one needs to make an informed decision about 9/11—whether one is a journalist, a political leader, a religious leader, or an ordinary citizen concerned about truth, democracy, and the rule of law.

david ray griffin: 21 reasons to question the official story about 9/11

from steve watson: Independent presidential candidate Ralph Nader pledged support for a new investigation into the events of 9/11 Monday, commenting that the 9/11 Commission was “flawed, right from the get go”. Nader was questioned by members of We Are Change Ohio at a campaign rally in Cincinnati, Ohio earlier this week. Asked if he supported the 9/11 Truth Movement and the efforts of activists and victims’ families to expose the lies surrounding the attacks, Nader responded: “I was there when they were collecting signatures in the audience and I supported it.” Nader commented, referring to We are Change’s activities at the meeting. “The 9/11 Commission, first of all, it took the members of the great families to push the administration even to have an inquiry, can you imagine an attack like that and the government didn’t even want to have an inquiry?” stated Nader.

from michel chossudovsky: Today’s “Global War on Terrorism” is a modern form of inquisition. It has all the essential ingredients of the French and Spanish inquisitions. Going after ” Islamic terrorists”, carrying out a Worldwide preemptive war to ” protect the Homeland” are used to justify a military agenda. “The Global War on Terrorism” (GWOT) is presented as a “Clash of Civilizations“, a war between competing values and religions, when in reality it is an outright war of conquest, guided by strategic and economic objectives. The GWOT is the ideological backbone of the American Empire. It defines US military doctrine, including the preemptive use of nuclear weapons against the “state sponsors” of terrorism.