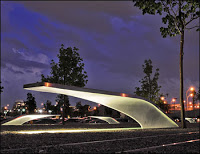 survivors of attack find consolation in march to pentagon

from washington post: Each year for the past four, Aline Tyler registered to participate in the annual America Supports You Freedom Walk to commemorate the lives lost on Sept. 11, 2001, and to honor the country's veterans. But when the day came, the 50-year-old Army secretary couldn't bear to lace up her sneakers and go... Tyler was among the Pentagon survivors taking part in the mile-long march from the Women in Military Service for America Memorial at Arlington National Cemetery to the Pentagon crash site. The event, sponsored by the Department of Defense, is one of several to mark this year's anniversary of the Sept. 11 terrorist attacks. On Thursday, the nation will mark the opening of the country's first major Sept.11 memorial with an evening ceremony at the Pentagon, where 184 people died, not including the five men who hijacked American Airlines Flight 77. "Everyone here is a distinguished person today," Gordon England, deputy secretary of defense, said before yesterday's walk... The day's events included a moment of silence for the Sept. 11 victims and a performance by the Oak Ridge Boys. The walk was the largest of about 300 taking place across the country, organizers said.

as pentagon tribute opens, others years away

from usa today: In between the Pentagon and the [Arlington National] cemetery is the first permanent memorial at one of the three sites defined by the 9/11 terrorist attacks... In lower Manhattan, where construction on at least seven major projects is underway at Ground Zero, a lasting tribute to the 2,750 who died there has been hindered by disagreements and competing priorities among government agencies, family groups and Wall Street interests. In Pennsylvania, the National Park Service is still buying land for a 2,200-acre memorial to the 40 crewmembers and passengers of United Flight 93 who tried to overpower four hijackers before their jet crashed.

nyc plans remembrances for 7th anniversary of 9/11
from dpa: Seven years after the September 11 terrorist strikes, New Yorkers on Thursday will remember the attacks that killed more than 2,700 people with the destruction of the World Trade Center's twin towers. The city will observe the anniversary with renewed calls for vigilance against the constant threats of new terrorist attacks. Names of the dead will be read yet again... The emphasis on the seventh anniversary has shifted to educating new generations about terrorist threats and the way families of victims survive the loss of loved ones. The National September 11 Memorial & Museum this week unveiled programmes for classroom remembrances, distributed to selected schools across the United States. The outreach scheme will identify teachers to work in partnership with the memorial foundation to teach in classrooms about the attacks on September 11, 2001.

bloomberg: no more excuses in rebuilding at wtc site

from ny1: On the eve of the seventh anniversary of the September 11th terrorist attacks, Mayor Michael Bloomberg says there should be no more excuses and no more delays in the rebuilding effort. In a submission to Tuesday's Wall Street Journal, Bloomberg urged the Port Authority to ensure that the memorial is completed by the 10th anniversary of the attacks.

from ap: The latest design for the Sept. 11 memorial entrance pavilion has a facade that evokes the World Trade Center's twin towers, and builders still hope the memorial will open by the 10th anniversary of the terrorist attacks. The three-story, asymmetrical glass and steel building is the last piece of the 8-acre memorial plaza at ground zero, a redesign of a building first introduced as a much larger museum space three years ago. Craig Dykers, architect for the Norwegian architectural firm Snohetta, said the reflective steel facade was inspired by the World Trade Center towers. He said natural light will hit the building at different points of the day and change its appearance. "At times, you'll see yourself in the building," Dykers said Tuesday at the design unveiling. 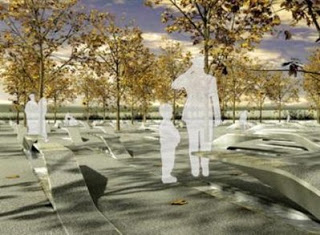 from reuters: On the morning of September 11, 2001, Patrick Smith was walking toward a television set in a Pentagon office to get news of the attacks on New York's World Trade Center when he heard a loud boom. "The wall in front of me kind of buckled inward," he recalled. "The ceiling tiles and wires all started coming down, then it went black and then ... a giant fireball just came over the wall." Such scenes will pass through the minds of many survivors on Thursday, when the first major permanent U.S. memorial to commemorate the September 11 attacks will be dedicated to the 184 victims of the assault on the Pentagon. The ceremony at the fortress-like headquarters of the U.S. military, attended by President George W. Bush, will take place exactly seven years after al Qaeda militants hijacked four airliners and killed almost 3,000 people.

rumsfeld returns to the scene of the crime
from dpa: Former US Defence Secretary Donald Rumsfeld, who helped carry victims of the 2001 terrorist attack on the Pentagon out of the destroyed building, Thursday said the 184 people who died were among the first to fall in the war against terrorism. "Make no mistake, it was because they were Americans that they were killed here in this place," he said.

from cbs: Every day, 2,000 people visit the Tribute Center across from Ground Zero to witness the horror of 9/11: A piece of a plane. A firefighter's jacket. The faces of victims. "You're looking at steel that was bent, most likely, from the force of the collapse," said Alice Greenwald, director of the World Trade Center Museum. But 15 miles away, hidden inside an 80,000-square-foot hangar at New York's JFK Airport, is the largest collection of precious pieces from that fateful day, CBS News correspondent Michelle Miller reports.

7yrs later, new yorkers pause to remember
from washington post: At Engine Company No. 10 on Liberty Street, next to the World Trade Center site, tourists and local residents left flowers, posed for pictures with the firefighters and lined up to buy T-shirts with the station house logo "10 House Still Standing." In Battery Park, at the southern tip of Manhattan, large U.S. flags displayed the names of those who died on Sept. 11, 2001, while the victims' family members and tourists signed and wrote messages on a steel beam to be used in the construction of a memorial and museum. And at a downtown hotel, workers were busy photographing and archiving the victims' personal items -- shoes, wallets, business cards -- while family members lined up in front of scanners with envelopes stuffed with photographs, to be included as part of an online record.

Seven years have passed since the terrorist attacks on New York, Washington and Pennsylvania, but the memory of that day remains seared into the city's collective psyche. And with the memorials, tributes, wreaths and events -- organized and impromptu -- there is a concerted effort to ensure the memory is preserved.

"It's something we've got to think about every year -- or even every day," said Gloria Harris, a cafeteria worker from Barbados, who lost a close friend in the World Trade Center's restaurant. She came with her husband, Grantley Harris, to sign the 37-foot-long two-ton beam. "You have to study it every day," she said. "You're going to remember it until you're gone yourself. At least we're going to remember it."