rnc features ominous 9/11 ‘tribute’
from raw replay: The three-minute video, which featured graphic, disturbing images of a plane flying into the World Trade Center and the Twin Towers’ collapse, attempts to conflate all of America’s struggles in the Middle East into a singular crusade against a uniform enemy. “The first attack occurred in Iran,” the narrator says over photos of hostages held there in 1979. According to the video, it was the same enemy who bombed US embassies, the USS Cole and the Twin Towers and Pentagon.

olbermann punished for crying foul at gop exploitation of 9/11
from infowars: Keith Olbermann, well-known critic of terrorism fear-mongering and the Bush administration alike, has apparently lost his election coverage anchor position at MSNBC for his alleged ‘bias’ in reporting. While he has come under fire for ‘leaning left,’ the straw that broke the camel’s back was not Olbermann’s preference for Obama or for Democrats over Republicans, but the crime of criticizing the blatant exploitation of the September 11th attacks.

political abuse & misuse of 9/11
from the jack online: The exploitation of 9/11 has been a political tool for the past seven years. It is unjust for any political party or candidate to continue to evoke the memory of 9/11 and use the fear associated with it to sway a political vote. Before we are Republican or Democrat, Green or Independent, we are American and Americans stand up for what is “right.” As Americans, we believe that this video, used in this manner, was not right. It’s time to practice the justice that we preach. Political parties and their members need to stop desecrating the memory of 9/11 and let the memory of those lost rest in peace. America and the world needs to know that the values that unite us as a nation have not been lost. As a nation we see things differently, but share a commitment to freedom and democracy. Above everything else, we are Americans. Let’s not let racism and fear keep us from realizing what 9/11 truly was and continues to be. 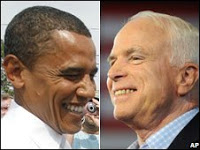 from bbc: The US presidential rivals, Barack Obama and John McCain have said they will appear together on the anniversary of the 11 September 2001 attacks. The senators said they would take part in the commemorations in New York – the site of two of the attacks. The two candidates said they would put aside politics to honour the memory of the nearly 3,000 people who died.

mccain & obama call a truce for 9/11 anniversary
from mcclatchy: In a departure from the increasingly nasty environment of the presidential campaign, Barack Obama and John McCain will make a joint appearance on Thursday in New York to honor the victims of the Sept. 11, 2001, terrorist attacks. It’s the kind of civility that the public says it wants in politics but rarely gets. “It says that despite all the differences, they agree broadly on issues of patriotism and the need to oppose the forces that caused 9/11,” said John Geer, the editor of The Journal of Politics.

families welcome candidates’ wtc appearance
from ap: Relatives of people killed at the World Trade Center on 9/11 say the decision by Sens. Barack Obama and John McCain to appear together at ground zero on the seventh anniversary of the attacks is a welcome gesture of respect. “I think it’s a wonderful thing,” Sally Regenhard, whose son, Christian, was killed at the trade center, said Monday. “I assume that they’re coming down here to pay respects to the people who lost their lives and to really affirm the fact that this is sacred ground for America.” Obama and McCain, the Democratic and Republican presidential nominees, said Saturday they would appear together at ground zero on Thursday “to honor the memory of each and every American who died.” The campaigns already had agreed to halt television advertising critical of each other on Sept. 11.

9/11’s accomplices vie for US presidency

from global research: In his much-ballyhooed acceptance speech, Barack Obama declared that he would “finish the fight against the terrorists who actually attacked us on 9/11”. If Obama wishes to be true to his promise, he could begin with his own running mate, Senator Joe Biden. Biden was one of several top Washington officials who met with Lieutenant General Mahmoud Ahmad, the head of Pakistan’s Inter Services Intelligence (ISI) on and around September 11, 2001.

The ISI is a foreign branch of the CIA. “Al-Qaeda” is a covert operation that is managed by Anglo-American military-intelligence. Ahmad, the “9/11 money man” who delivered funds to alleged lead suicide hijacker Mohammed Atta prior to the attacks, met personally with Biden on September 13, 2001.

This case, detailed in Michel Chossodovsky’s Political Deception: Missing Link Behind 9/11, remains one of hundreds of smoking guns revealing direct US connections to 9/11, for which Biden has never provided a credible explanation.

At the same time that he was meeting with a man directly connected to the alleged hijackers, Biden was among the loudest and most bellicose voices joining Bush-Cheney for the bombing of Afghanistan, in retaliation for 9/11. Biden expressed an interest in “personally shooting Osama bin Laden”. Not surprisingly, John McCain expressed the same post-9/11 bloodlust, in his infamous editorial, “War is hell. Let’s get on with it“

Biden’s tune has remained unchanged, to this day. He wants to “finish the fight against al-Qaeda and the Taliban”, and (in language that appears to be the new neoliberal “talking point”) “take out the ones who actually attacked us on 9/11”. The fact that Biden and McCain, two major shills for the “war on terrorism” lie, are vying for White House power speaks for itself.

When recently confronted by an independent journalist about his meeting with Mahmoud Ahmad, Biden offered a series of non-sequitors, and then had his security guards escort the inquiring individual away.

from guardian: Bill Clinton met with families of the victims of 9/11 on the eve of the seventh anniversary of the attacks on New York and Washington, and called for unity to return to the United States. In the wake of his own bruising encounters on the campaign trail on behalf of his wife Hillary, and amid a presidential contest that is daily growing more ugly and rancorous, the former president bemoaned the current lack of togetherness, contrasting it with the mood that prevailed in the country immediately after the attacks. “I will always remember the way New York and America came together on 9/11,” he said. “Every time we fail to do that when our national interest is involved, I wish we could recover it.”

bushies proud 9/11 did not recur
from washington times: President Bush became a war president on Sept. 11, 2001, and on Thursday he marks the anniversary of terrorist attacks for the last time as commander in chief. Though he is beset by record-low approval ratings and criticism from every side that has not abated for years, the president and his supporters take pride in the fact there has not been another attack like the one seven years ago that killed nearly 3,000 people. Joe Hagin, one of the president’s closest aides until he resigned in July, said that in the days after 9/11 the senior staff felt another attack on their watch was inevitable. “People should feel a great sense of pride that here we are all these years later and here’s not been another attack,” Mr. Hagin said.

election will reveal moral, lessons learned of 9/11
from washington times: Our political leaders, even those who had doubts (and would later apologize for their bandwagon mistake), had to say the word “war” as a sign of how fearful they wanted us to be. All of this activity naturally was accompanied by a lot of flag waving and hymn singing about “the home of the brave.” That this orgy of patriotism took place while the stock market was crashing and people were refusing to get aboard airliners passed largely without comment. Before we knew it, we were in Iraq looking for weapons of mass destruction. We all know how far that has gotten us.

What’s the moral of this story?

That we turned out to be more easily terrorized than the people of, say, England or Israel?

That bravery is as bravery does?

That patriotic posturing is a poor substitute for thought?

That fear and hate are the most effective manipulators of human behavior that exist?

Or maybe the moral is simply that we get the political leadership that we deserve. We’ll know more about what we have learned after this Nov. 4, another date that might “change the world.”