the bbc believes in 9/11 conspiracy theories 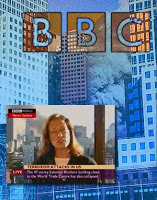 from rogue government: The BBC which just recently aired a hit piece on people asking questions about the events of 9/11, also posted an editorial by Mike Rudin on their web site attempting again to rationalize how they managed to report that WTC-7 had collapsed before the building actually fell… This is just one aspect of the BBC engaging in an incredible amount of deception. As hard as this might be to believe, this is nothing compared to the insane amount of lies and deceit that is packaged in their new documentary “The Third Tower” that attempts to prove the insane conspiracy theory that WTC-7 was brought down due to fire damage.

…or you can watch ‘third tower‘ here… 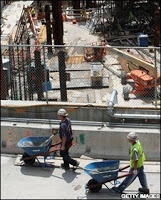 from bbc: A US judge has dismissed a legal case claiming that the New York authorities denied proper burials to the victims of the attacks on 11 September 2001. Relatives of World Trade Center victims claimed the city acted wrongly by sending debris that might have held remains to a rubbish dump. The lawsuit asked for the debris to be removed to land that could be turned into a cemetery. But the judge said the families had no claim to the removed material.

“shockingly calm”: phone calls from the planes on 9/11
from 9/11 blogger: A number of people received phone calls the morning of September 11, 2001 that they believed were made by individuals on board the planes that crashed in New York, Washington, and Pennsylvania. Descriptions of these calls, however, reveal something odd. According to the official story we have been told, the callers were in an unprecedented crisis, stuck on planes under the control of murderous terrorists, and with no knowledge of whether they were going to be allowed to live or die. Yet in many of the phone calls, the caller appears to have been remarkably calm. Perhaps if just a few of them–for example, those with specific personal experiences, like the flight attendant who was a former police officer–had maintained their composure, then this would be less remarkable. Yet the large majority of the callers displayed this same calmness. In their recollections, some of the people who received the calls have indeed commented on this fact, apparently surprised by it. Some of them have also commented on the absence of panic, screaming, or other sounds of chaos in the background. 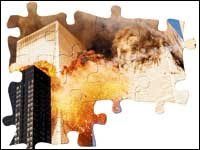 from under the radar: With the global awakening of what really happened on 9/11 surging ahead at full steam, many people are now aware of facts such as prior government knowledge of the attacks, the mysterious collapse of WTC 7, all of the military and terror drills going on at the same time of the attacks, and the possibility that WTC 1, 2 and 7 were brought down by controlled demolition, and not by fire. What is not known by the majority of these people, but is as equally important as WTC 7 is the story of Urban Moving Systems…

what to do with ground zero
from jerry mazza: In light of the fact that we are two months and 11 days shy of the seventh anniversary of 9/11, America’s greatest homeland attack, and that the New York Times reported Monday in its City Room Blog, Higher Costs and Delays Expected at Ground Zero by Charles V. Bagli, who Tuesday reported Rebuilding at 9/11 Site Runs Late, I would suggest first you read the articles, then click on Wikipedia’s World Trade Center Site. The latter will give you a brief history of the real estate boondoggle that has left the 16-acre site with construction stops and starts, a 36-page PDF by the Port of Authority of New York and New Jersey about what went wrong, and the bottom line that the memorial to the lost of 9/11 will not be open on time for the 10th anniversary, that’s September 11, 2011, as previously announced.