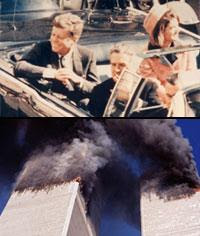 jfk, 9/11 & the designated suspects in both cases

from peter dale scott: I wish to summarize again the first striking similarity between 11/22/63 and of 9/11/01: the dubious detective work on those two days. Less than fifteen minutes after the President’s assassination, the height and weight of Kennedy’s alleged killer was posted. Before the last of the hijacked planes crashed on 9/11, the FBI told Richard Clarke that they had a list of alleged hijackers.

In the case of Oswald, within fifteen minutes of the assassination and long before Oswald was picked up in the Texas Theater, Inspector Sawyer of the Dallas police put out on the police radio network, and possibly other networks, a description of the killer – "About 30, 5’10", 165 pounds." As noted, this height and weight exactly matched the measurements attributed to Lee Harvey Oswald in Oswald’s FBI file, and also in CIA documents about him. 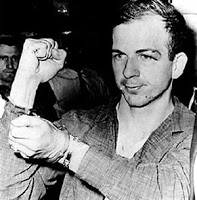 The announced height and weight were however different from Oswald’s actual measurements, as recorded by the Dallas police after his arrest: 5’9 1/2", 131 pounds. More importantly, there is no credible source for the posted measurements from any witness in Dallas. (The witness said to have spotted him, Howard Brennan, failed to identify Oswald in a line-up.) This leaves the possibility that the measurements were taken from existing files on Oswald, rather than from any observations in Dallas on November 22. If so, someone with access to those files may have already designated Oswald as the culprit, before there was any evidence to connect him to the crime.

A similar situation pertains to the alleged hijackers on 9/11. For example, shortly afterwards men in Saudi Arabia complained that "the hijackers' `personal details’" released by the FBI - "including name, place, date of birth and occupation - matched their own." One of them, Saeed al-Ghamdi, claimed further that an alleged photograph shown on CNN (of an alleged Flight 93 hijacker with the same name) was in fact a photograph of himself. He speculated "that CNN had probably got the picture from the Flight Safety flying school he attended in Florida."

If the above information is accurate, then the details posted by the FBI and CNN about the alleged hijackers cannot have derived from the events of 9/11, with which the survivors in Saudi Arabia would appear to have been uninvolved. Once again this leaves the strong possibility that the details were taken from existing files, rather than from empirical observations on September 11.

And some of the hijackers, like Lee Harvey Oswald, may have been in CIA files for a special reason: because the CIA had an operational interest in them.