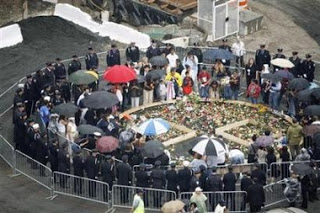 from steve watson: The decision to hold Iraq war commander Gen. David Petraeus' testimony to the Congress on the sixth anniversary of 9/11 has been condemned by families of the victims of the attacks as another crude attempt by government officials to link the event to the war in Iraq despite the fact prior intelligence reports have dismissed any such notion.

Petraeus' testimony, throughout which he has advocated a continuation of the so called surge in Iraq, has been running side by side all day on news networks with the 9/11 memorials and tributes taking place in New York.

The 9/11 family group September Eleventh Families for Peaceful Tomorrows has released a statement which slams the timing of the hearing:

"The timing of this testimony is another attempt by government officials to force a non-existent connection between the events of 9-11 and this administration's disastrous policy of invasion and war in Iraq. The 9-11 Commission found there was no operational or cooperative relationship between Al Qaida and Iraq. It is widely understood today that this administration's actions in Iraq have in fact created a terrorist sanctuary where none previously existed, at a cost of more American lives than were lost on 9-11, tens of thousands maimed and wounded, and over 100,000 Iraqi dead.

Six years after September 11, 2001, politicians, from the White House to the halls of Congress, continue to abuse the memory of our loved ones who died in that attack by attempting to invoke their and our suffering to further this administration's political goals. As we have stated on previous occasions, we ask any and all politicians and candidates for office to respect the memory of the innocent lives lost on 9-11 by refraining from using the 9-11 sites, memorials, and anniversaries for political ends, either explicitly or as political 'backdrop.'"

Senior officials including Bush, Rumsfeld and particularly Dick Cheney have repeatedly asserted that the U.S. needed to go to war with Iraq because U.S. intelligence had evidence that Saddam Hussein was working with Al Qaeda.

As reported by the NY Times, "The chairman of the monitoring group appointed by the United Nations Security Council to track Al Qaeda told reporters that his team had found no evidence linking Al Qaeda to Saddam Hussein" [6/27/03]. Similarly, even the 9/11 commission report undercuts claims before the war that Hussein had links to Al Qaeda.

Even the Pentagon dismissed any link between Al Qaeda and Iraq.

In addition to condemning the use of 9/11 to launch preemptive war, September Eleventh Families for Peaceful Tomorrows has also slammed the use of 9/11 by the Neocon White House to engage in domestic repression of civil rights, stating on their website:

"We have witnessed the use of 9/11 to justify the slaughter of tens of thousands of people in Iraq and Afghanistan. Thousands of our own soldiers have been killed. Two million refugees in Syria and Jordan languish in poverty and desperation. And we have witnessed as well the suppression of our constitutional rights at home. We have been unable to stop any of it." 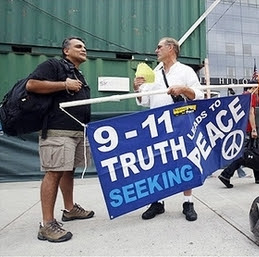 The group has also been vocal in calling for an end to secrecy surrounding the events of 9/11 and has dispelled the myth, often leveled at 9/11 truth groups, that the families are insulted by questioning of the official version of events:

"And so we come to the sixth anniversary of the attacks of September 11th. There has been too little introspection concerning those attacks, no accountability from our government, and reports more secretive than revealing about what happened in the immediate aftermath of those attacks. Six years later, we have more questions than answers, more dead to mourn, and a thing with feathers still perches in our souls, yearning for peaceful tomorrows."

We have reported many times previously that some of the largest 9/11 family groups are, like 9/11 truth groups, seriously concerned over the government's account of the events and are themselves vocally active in demanding answers to the many questions that still remain unanswered and uninvestigated six years later.