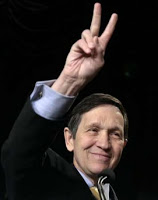 from cleveland plain dealer: Cleveland Democratic Rep. Dennis Kucinich was the only member of Congress on Monday night to vote against a symbolic resolution to recognize September 11 as a day of remembrance, extend sympathies to those who lost their lives and their families and honor emergency workers and the U.S. armed forces.

Kucinich issued a press release before the vote, criticizing the resolution as "incomplete," and saying that Congress needs to "wake up to the truth and exercise its obligation under the Constitution to save our nation from being destroyed from the lies that took us into Iraq, the lies that keep us there, the lies that are being used to set the stage for war against Iran and the lies that have undermined our basic civil liberties here at home."

"The September 11 resolution that Congress considers today should have made reference to those matters," he continued. "It does not, so I cannot support it."