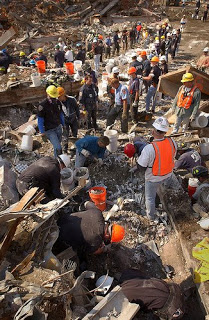 from wvde: John Feal, founding president of the FealGood Foundation and a demolition expert who worked at Ground Zero following the Sept. 11, 2001 terrorist attacks, will bring his message to Upshur County students and residents on Friday, Oct. 24. Feal and up to seven other first responders will meet with students at Buchannon Upshur High School beginning at 8:30 a.m. The group will meet with the community later in the day.

Feal, like 70 percent of 9/11 workers, suffers from post-9/11 illnesses. One of his feet had to be amputated after being crushed by an eight-ton steel beam. He also suffers from a respiratory syndrome called World Trade Center Cough and post-traumatic stress disorder.

Feal agreed to visit West Virginia after some Buckhannon-Upshur High School students contacted him via e-mail after watching a documentary in health educator Mateal Poling’s class. The documentary, Save the Brave, chronicles the daily struggles of 9/11 Ground Zero workers in the seven years since the attacks. Greg Quibell, one of the men featured, died of his injuries the day before the film’s premiere in New York.

“You have no idea how excited they were when Feal replied -- me too,” Poling said. “It is hard to imagine that these kids were only first and second graders on 9/11, but thanks to Feal’s efforts, our students are starting to have a better understanding of the profound effects of that day.”

Feal said he is “humbled and honored to meet such amazing Americans.”

“They are a reflection of the teacher who has taught them well,” Feal said. “Your resolve and testament is what makes great future leaders of this country. We look forward to coming to the great state of West Virginia to share our stories and tell of the thousands that need our help.”

The FealGood Foundation’s primary mission, according to its Web site “is to spread awareness and educate the public about the catastrophic health effects on 9/11 first responders, as well as to provide assistance to relieve these great heroes of the financial burdens placed on them over the last five years.” The foundation also works to create a network of advocacy on 9/11 healthcare issues.