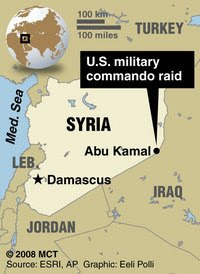 the cia led US strike in syria that killed 8

from mcclatchy: A CIA-led raid on a compound in eastern Syria killed an al Qaida in Iraq commander who oversaw the smuggling into Iraq of foreign fighters whose attacks claimed thousands of Iraqi and American lives, three U.S. officials said Monday.

The body of Badran Turki Hishan al Mazidih, an Iraqi national who used the nom de guerre Abu Ghadiya, was flown out of Syria on a U.S. helicopter at the end of the operation Sunday by CIA paramilitary officers and special forces, one U.S. official said.

"It was a successful operation," a second U.S. official told McClatchy. "The bottom line: This was a significant blow to the foreign fighter pipeline between Syria and Iraq."

A senior U.S. military officer said the raid was launched after human and technical intelligence confirmed that al Mazidih was present at the compound close to Syria's border with Iraq. "The situation finally presented itself," he said.

The three U.S. officials, who all spoke on the condition of anonymity because the operation was classified, declined to reveal other details of the raid. A CIA spokesman declined to comment.

cia led attack against syria related to 'security pact' in iraq
from kurt nimmo: It should probably come as no surprise the CIA led the recent attack on Syria that allegedly killed an “al-Qaeda commander” who supposedly “oversaw the smuggling into Iraq of foreign fighters whose attacks claimed thousands of Iraqi and American lives,” according to McClatchy, citing “U.S. officials, who all spoke on the condition of anonymity because the operation was classified.” The CIA has a long and sordid history of violating the national sovereignty of nations, beginning in 1948 when the agency’s “covert-action wing” was created by Wall Street lawyer Frank Wisner. According to its charter, the covert-action wing, also called the Office of Policy Coordination, was “responsible” for “propaganda, economic warfare, preventive direct action, including sabotage, anti-sabotage, demolition and evacuation procedures… subversion against hostile states, including assistance to underground resistance groups” (see Steve Kangas’ A Timeline of CIA Atrocities).