from gothamist: Now that the Port Authority doesn't want to give "unrealistic" or "phony" timelines about projects at Ground Zero, it's clear many projects won't be completed. Like the long-awaited 9/11 Memorial. Back in 2006, when construction started, it was thought the memorial would be completed by 2009, but then last fall, 2011 was given as a completion date, for the 10th anniversary of 9/11. Now it's more likely it'll be done around 2013 or 2014. One man whose wife died on September 11 told NY1, "There are so many people that worked for a long time planning and designing this thing, the individual parts, that it appears to me, that no one was taking a look at the whole project."

update: retractable dome dropped from memorial's plan
from washington times: The World Trade Center's owner announced a major design change to its multibillion-dollar transit hub Tuesday, a day after concluding that most projects at ground zero are behind schedule and over budget. 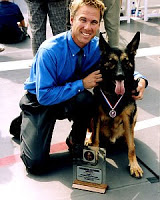 from afp: A dog that sniffed out survivors from under the rubble of New York's World Trade Center after the 2001 terror strikes is to be cloned, the California-based firm conducting the procedure said. Trakr, a German shepherd who lives with his owner James Symington in Los Angeles, was picked by BioArts International as the most "clone-worthy" canine in a competition offering an owner a free chance to replicate their pet... Now aged 15, the dog no longer has use of his back legs due to a degenerative neurological disorder. According to BioArts, experts believe the condition may be linked to exposure to toxic smoke at the World Trade Center site.