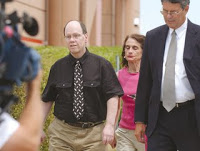 from winter patriot: Ronald Swerlein, an amateur rocket enthusiast from Longmont, Colorado, pleaded guilty last week to three counts of illegal possession of explosives, in a deal which seems likely to keep him out of prison. He had been charged with ten counts of possession of explosives; he pleaded not guilty to those charges last December. He had also been charged with one count of drug possession; that charge has been dismissed. Swelein has been free on bond since shortly after his arrest, and he remains free pending his sentencing, which is scheduled for August 8th.