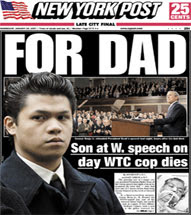 from raw story: A retired New York police officer, who was recognized as a hero for his service in the aftermath of the 9/11 terrorist attack on the World Trade Center, has passed away while awaiting a lung transplant.

Ceasar Borja, Sr., who was known for pulling 16 hour shifts in the vicinity of the World Trade Center, developed the “WTC cough” shortly after his retirement from the police force. He died on Tuesday night, just before his son, Ceasar, Jr., was a guest of Senator Hillary Clinton at the State of the Union address. Borja, Jr., is seeking to become a voice for those with health needs related to the aftermath of the collapse of the towers.