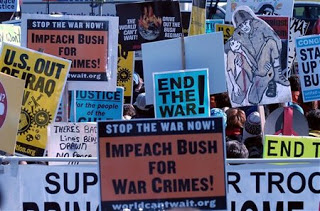 from ap/my way: Protesters energized by fresh congressional skepticism about the Iraq war demanded a withdrawal of U.S. troops in a demonstration Saturday that drew tens of thousands and brought Jane Fonda back to the streets.

A sampling of celebrities, a half dozen members of Congress and busloads of demonstrators from distant states joined in a spirited rally under a sunny sky, seeing opportunity to press their cause in a country that has turned against the war.

Standing on her toes to reach the microphone, 12-year-old Moriah Arnold told the crowd: "Now we know our leaders either lied to us or hid the truth. Because of our actions, the rest of the world sees us as a bully and a liar."

The sixth-grader from Harvard, Mass., the youngest speaker on the National Mall stage, organized a petition drive at her school against the war.