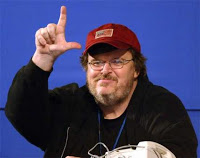 from ledger-enquirer: Controversial filmmaker Michael Moore's new movie examining the American health system is getting both jeers and cheers for taking ailing 9/11 responders to Cuba for treatment.

The Academy Award-winning documentarian isn't scheduled to release his film "Sicko" until next month's Cannes Film Festival, but the flick is already causing a firestorm.

Jeff Endean, 57, who spent three months digging through the rubble at Ground Zero, said it was "morally wrong" for Moore to take sick responders to Communist Cuba with the false hope of a cure.

"It just seems to me the only benefit to taking them there is because it's going to end up in a movie called 'Sicko' that's going to make a lot of money and make the American health care system look bad," Endean said.

"I'm sick and I have miserable days, but I don't think that I'm getting worse and it's because of the brilliance and dedication of these people," Endean said. "It infuriates me (for anyone) to say that the American medical system is bad."

Moore - director of "Fahrenheit 9/11," a searing look at the Bush administration's reactions to the 2001 attacks - is billing "Sicko" as "a comedy about 45 million people with no health care in the richest country on Earth."

While the filmmaker could not be reached for comment Sunday, other 9/11 volunteers praised him for examining medical alternatives for them.

Retired Firefighter Vinnie Forras, 49, said he's been going to Ecuador and Bolivia for experimental treatments for lung damage and severe headaches he has suffered since responding at Ground Zero. "For me, anyone who's looking to try to help the guys and the women who are sick is a good thing," he said. "I don't care where you go for that treatment."

John Feal, who runs [The Feal Good Foundation] to help ailing 9/11 volunteers, added, "If you had a 12-year-old son with a brain tumor and the doctor says, `It's inoperable and your son's going to die,' I don't think you're going to take that sitting down. You're going to get another option."

listen to an interview with john feal on visibility 9/11