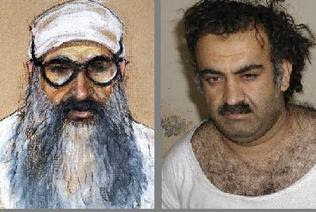 ...now more than ever, as we see another big attack on 9/11 truth, it's important to remember that obama's war of terror is still based on the previous puppet administration's lies about 9/11...

from ap: Accused al Qaeda mastermind Khalid Sheik Mohammed complained that interrogators tortured lies out of him, though he proudly took credit for more than two dozen other terror plots, according to newly released sections of government transcripts. "I make up stories," Mohammed said at one point in his 2007 hearing at Guantánamo Bay. In broken English, he described an interrogation in which he was asked the location of al Qaeda leader Osama bin Laden. "Where is he? I don't know," Mohammed said. "Then he torture me. Then I said, 'Yes, he is in this area or this is al Qaeda which I don't know him.' I said no, they torture me." Yet at the same military tribunal hearing, Mohammed ticked off a list of 29 terror plots in which he took part.

9/11 truth activist sues glenn beck & fox news for defamation
from washington's blog: An East Coast 9/11 truth activist is preparing to file a defamation lawsuit against TV / radio personality, Glenn Beck, the producers of the Glenn Beck Program, and the Fox News Channel. Specifically, Greg Hoover will be suing the above-described defendants in Federal Court for Beck’s having repeatedly broadcast statements characterizing those who question the government’s official version of the events of 9/11 as, "anarchists," "terrorists" and as persons denying the Holocaust. The complaint will note that - on October 22, 2007 - Beck suggested that those identifying themselves as associated with the 9/11 truth movement are "dangerous" "anarchists" who deny the Holocaust, and are "the kind of group that Timothy McVeigh would come from." The suit will also note that during Beck’s June 10th broadcast Beck linked the murder of the Washington D.C. holocaust museum guard with "9/11 truthers." 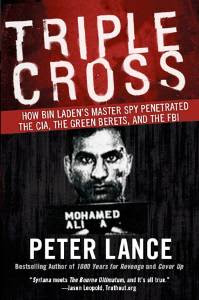 from raw story: Peter Lance should be thanking Patrick Fitzgerald right now, even as the attorney’s checks are being signed. If it were not for the U.S. Attorney who famously prosecuted I. Lewis “Scooter” Libby, the former Vice President’s Chief of Staff, the re-release of Lance’s stunning tale of mishandled espionage leading up to the attacks of Sept. 11, 2001, might be overlooked. The former ABC News investigative reporter’s book Triple Cross hit relatively few shelves in 2006 as a hardcover and left retail quietly, almost completely ignored. Now, with its paperback release looming, U.S. Attorney Patrick Fitzgerald is threatening to sue over material which he calls “defamatory” and “easily proven to be objectively false,” some of which touches on little known information relating to the attacks of Sept. 11, 2001. Because of the threat, the reissue of Triple Cross received attention from The Washington Post, Huffington Post, The Wall Street Journal and the Associated Press, among others. “That’s the lesson of censorship,” chided Lance, speaking to RAW STORY.

faulty equipment stops deutsche bank work again
from tribeca trib: For the second time in a week, faulty equipment has led to the shutdown of decontamination work on the former Deutsche Bank tower, near the World Trade Center site. Responding to reports of smoke outside the building late Tuesday morning, June 9, firefighters discovered a malfunction in part of the building’s negative air pressure machinery, which produces a hermetic seal on the toxic portions of the tower. Crews were told to quit working on the building, and did not return to work until the following morning. The smoke was the result of a piece of overheated equipment outside the building, according to Mike Murphy, spokesman for the tower’s owners, the Lower Manhattan Development Corporation. “Right now we’re trying to figure out exactly why that equipment wasn’t working properly,” Murphy said.

9/11 commission & more: additions to 9/11 timeline as of june 16
from history commons: Some of the recently added entries go into more detail about the 9/11 Commission, which discovered the FAA was withholding documents from it in September 2003 and issued its first subpoena for them a month later. Soon after, the commission also subpoenaed the Pentagon, despite a last-ditch bid to avert it by the commission’s Vice Chairman Lee Hamilton, a good friend of Defense Secretary Donald Rumsfeld. In addition, Commissioner John Lehman repeatedly told the White House of Saudi links to the 9/11 plotters, but the administration was uninterested.

On the day of 9/11, fighters launched from Langley Air Force Base were given the wrong coordinates for Washington at about 9:40 a.m., Otis Air Force Base was ordered to launch all fighters at about 10:20 a.m., and a security officer became trapped in WTC 7 around 10:00 a.m.

The very first entry in the timeline has also changed, and is now for a 1968 advert showing an airliner striking one of the WTC buildings, something that nearly happened in 1981.

Finally, in the late 1990s Yemeni authorities saw Abu Hamza al-Masri, an informer for the British security services, as a terrorist leader in Yemen.