from wikinews: Protests, riots and violence broke out in cities in Iran Saturday night following an election which many in Iran and the world say was fraudulent. Demonstrations took place late into the night, with waves of police fighting protestors in Tehran, Shiraz, Mashad and Rasht.

Protesters chanting "Death to the dictator!" occupied major streets around Tehran, with roadblocks being set up against police. Tear gas has been deployed against protestors in the upscale Valiasr Street district of Tehran as well as at the University of Tehran.

The protestors are supporters of Mir-Hossein Mousavi, a candidate in the Iranian presidential election. Mousavi accuses the Iranian government of "appalling" fraud after it reported that the nation's current president Mahmoud Ahmadinejad, who had been expected to receive less than 50% of the vote and have to face Mousavi in a runoff election, received 62%. Addressing officials in an open letter, Mousavi said, "this country has been through a grand Islamic revolution and the least message of this revolution is that our nation is alert and will oppose anyone who aims to seize the power against the law." The protesters, reports say, do not seek to overthrow the Islamic regime, which has been in place in Iran since 1979, but instead to reform it. 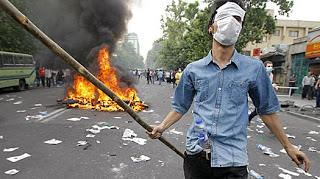