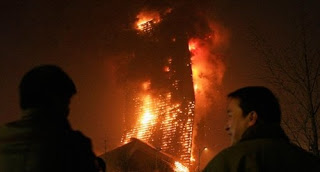 from paul joseph watson: A fierce fire consumed all 44 floors of a skyscraper in Beijing today, shooting 30 foot flames into the air, but unlike the similarly-sized 47-story WTC 7, which suffered limited fires across just eight floors, the building in China did not collapse. “The fire was burning from the ground floor to the top floor of the large building, the flames reflecting in the glass facade of the main CCTV tower next to the hotel and cultural center,” reports the New York Times. “The 241-room Mandarin Oriental hotel in the building was due to open this year. Flames were spotted around 7:45 p.m. and within 20 minutes the fire had spread throughout the building, dominating that part of the city.” “Hundreds of firefighting vehicles and police blocked off all approaches to the building - which was also set to house a luxury hotel due to be opened in 2009 - with flames appearing to leap 20 to 30 feet into the air,” adds The London Times.

still standing: the building that proves wtc7 was imploded 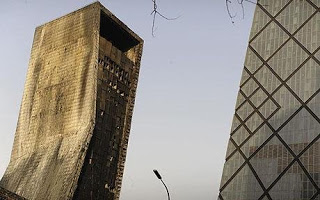 from paul joseph watson: New videos of the Mandarin Oriental Hotel fire in Beijing highlight the vivid contrast between the damage it suffered as it was completely consumed by roaring flames, yet remained standing, and the comparative sporadic fires across just 8 floors that led to the complete free fall collapse of WTC 7. 9/11 truth debunkers are in a bind as to how to respond to the Beijing skyscraper fire because of the building’s similarity in size to Building 7 and the gargantuan fire damage it suffered in comparison with the limited “office fires” witnessed in WTC 7. The Mandarin Oriental Hotel is over 500 feet tall, just 100 feet short of the height of WTC 7.

liar, liar... more on the fire

13 new penttbom.com videos
from penttbom.com: In reference to our FOIA request, the FBI has sent us 13 additional PENTTBOM videos. This is the second round release...

flashback: new video of 'third plane' over nyc on 9/11

from presstv: The CIA has launched a large-scale espionage operation to prevent a suspected terror attack, believed to be brewing in the UK, on US soil. American spy chiefs believe a British-born Pakistani extremist entering the United States under the Visa Waiver Program is likely to be the source of another 9/11-style attack. During recent intelligence briefings US President Barack Obama was warned by the CIA about the growing threat posed by British "Islamist extremists" to US homeland security. The CIA has informed the newly-installed US president that it has planted record numbers of informants in Britain's Pakistani community to monitor the 2,000 terrorist suspects identified by MI5 - the British Security Service. A former CIA officer and an advisor to President Obama, Bruce Riedel, told The Sunday Telegraph that "The British Pakistani community is recognized as probably al-Qaeda's best mechanism for launching an attack against North America." Riedel, who has worked as a Middle East expert on the White House National Security Council for three presidents, added, "President Obama's national security team are well aware that this is a serious threat... Around 40 per cent of CIA activity on homeland threats is now in the UK. This is quite unprecedented," said the British intelligence source.