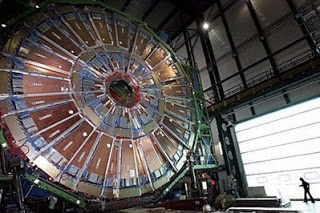 from afp: Researchers announced Monday a new delay for the restart of Europe's Big Bang atom-smasher, saying the faulty multi-billion dollar machine would now be turned back on in late September. The European Organisation for Nuclear Research (CERN) had planned to relaunch the Large Hadron Collider (LHC) this spring before delaying it to the summer. But CERN management decided to aim for a September restart to reinforce protection systems. "The schedule we have now is without a doubt the best for the LHC and for the physicists waiting for data," CERN Director General Rolf-Dieter Heuer said in a statement. "It is cautious, ensuring that all the necessary work is done on the LHC before we start-up, yet it allows physics research to begin this year."

flashback: 'end of the world' machine breaks down again

who'll be the next darpa chief?
from danger room: Tony Tether, the long-time chief of Darpa, is stepping down. So who'll be the next to head up the Pentagon's premiere research agency - and become the country's most visible defense geek? Several different names keep coming up. In no particular order, they include: 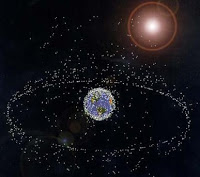 from register: US aerospace colossus Boeing says it has conducted successful ground testing of America's planned "space surveillance" satellite system. The idea, essentially, is spy satellites to spy on other spy satellites. Boeing and the US Air Force refer to the new watcher-watcher kit as Space Based Space Surveillance (SBSS). "The SBSS team is making good progress on the path toward launch," said Colonel James Jordan of the USAF Space Superiority Wing in Los Angeles. The colonel was speaking of recent tests in which a space-command ops centre in Colorado successfully sent control signals over "the encrypted Air Force satellite control network" to an SBSS spacecraft on the ground. The plan is for the first SBSS sats to be launched this spring. Once in space they will be able to monitor other objects in near-Earth space using optical sensors. America would like to be able to do this primarily because keeping track of opposition spy satellites is difficult from the Earth's surface... SBSS watcher-sats high in space can monitor a large part of an entire hemisphere, unaffected by weather. Not only can they keep tabs on opposition spybirds as they orbit, they can also watch what happens after things are launched into space. "The importance of a space-based capability to monitor space assets cannot be overstated," said Craig Cooning, Boeing veep in charge of space monitoring stuff. Well, maybe it can be just a little.

amerithrax lab halts research after toxin-tracking scare
from danger room: When the Pentagon needs to handle the deadliest biowarfare threats, it turns to the labs of the U.S. Army Medical Research Institute of Infectious Diseases (USAMRIID) in Maryland. It's the only place in the American military complex equipped to handle the worst of the worst diseases -- those that have no cure and are transmissible by air. Which makes it extremely unnerving, that the place had to suspend biodefense research on Friday, "after discovering apparent problems with the system of accounting for high-risk microbes and biomaterials." That's the scoop from the new ScienceInsider blog, which notes that "the lab has been under intense scrutiny since August, when the Federal Bureau of Investigation named former USAMRIID researcher Bruce Ivins as the perpetrator of the 2001 anthrax letter attacks." The concern this time is that the lab may not be accurately tracking the use and storage of all of its biological organisms in an internal government database - leaving the door open to misplacement, mishandling, or worse. According to an internal memo obtained by ScienceInsider, "any materials found without a corresponding record in the database must be reported to the Vice Chief of Staff of the Army." "I believe that the probability that there are additional vials of BSAT [biological select agents and toxins] not captured in our … database is high," institute commander Col. John Skvorak wrote. This is not a good thing.

nerve agent may be missing from utah depot 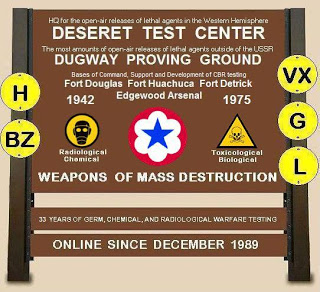 from deseret news: Is the Army missing some nerve gas? Pentagon auditors concede that is a remote possibility because of discrepancies in records between how much chemical weapons agent was initially stored and how much of it was later destroyed at Utah's Deseret Chemical Depot and other bases nationwide. But officials believe all the nerve agent in question was destroyed, according to a partially censored U.S. Army Audit Agency report obtained through a Freedom of Information Act request. Auditors list in it several reasons that could have caused apparent-but-unreal variances in those records. But auditors concluded, "The (Army Chemical Materials) Agency didn't have complete assurance that amounts recorded in the system were accurate, which increased its chances for heightened levels of program scrutiny by federal, state and international organizations that have a vested interest in the elimination of chemical weapons." Such words can cause shivers among Utahns who remember such things as the death of thousands of sheep in Skull Valley in 1968 that were blamed on nerve gas tests that went awry at nearby Dugway Proving Ground, and Skull Valley residents who have blamed mysterious illnesses on exposure to tiny amounts of nerve agent from such tests.