9/11 updates: jimmy carter says yes & so should you

from anthony the activist: Members of We Are Change Ohio got a chance to meet up with the former President Jimmy Carter while he was in Chicago on his latest book signing tour. We asked him if he would support the victim’s family member’s demand for a new investigation into 9/11. We took into consideration that Carter was under the advisement of Brzezinski who was a key contributor to the Taliban. However Carter has been critical of the Bush administration for years and stated that Bush exploited 9/11. So we figured there would be no harm in asking him. Some video was unable to get due to the aggressive secret service however we were successful in getting a positive response from the former president and recording the full audio.

‘rescue me’ works 9/11 conspiracy theories into its plot 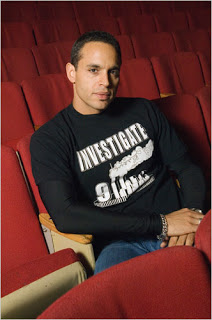 from gothamist: Word has leaked that in an episode for the upcoming season of the FX firefighter drama Rescue Me, the womanizing fireman Franco—one of the show’s main characters—espouses theories that 9/11 was an inside job, carried out as part of a neoconservative plot to change the definition of “preemptive attack” and control the world’s oil. The Times says that it marks “the first fictional presentation of 9/11 conspiracy theories by a mainstream media company.” Star of the show Denis Leary says that the scene is not far off from scenes in actual fire houses “where some of the younger members don’t even have to completely buy into the theory of 9/11 being an inside job, but want to discuss it.” What is more striking than the fictional plot line is that the show is using the real-life conspiracy beliefs of the actor who plays Franco, Daniel Sunjata, to promote the storyline. In a press tour, Sunjata said that he “absolutely, 100 percent” supports the assertion that “9/11 was an inside job.”

update: fox host: 9/11 truthers are ‘mentally ill’
from raw replay: Greg Gutfield, host of Fox’s Red Eye, joined Fox’s Steve Doocy, Gretchen Carlson and Brian Kilmeade to talk about an upcoming episode of FX’s Rescue Me where one of the characters explains that a neoconservative government was complicit in the 9/11 attacks. The hosts failed to note that the FX network is owned by New Corporation which is the parent company of Fox News. This video is from Fox’s Fox & Friends, broadcast Feb. 5, 2009.

study: 9/11 lung problems persist years later
from ap: Researchers tracking Sept. 11 responders who became ill after working at the World Trade Center site found many had lung problems years later in a study the authors said proves persistent illness in people exposed to toxic dust caused by the twin towers’ collapse. The study by the Mount Sinai Medical Center’s medical monitoring program examined more than 3,000 responders between 2004 and 2007, repeating exams conducted between the middle of 2002 and 2004. Slightly more than 24 percent of the patients had abnormal lung function, the study found. In the earlier examinations, about 28 percent of the patients had similar results. “We know people we are following are still sick. It’s confirming what we’ve been seeing clinically,” said Dr. Jacqueline M. Moline, who treats ailing responders and co-authored the study.

flashbacks: ‘rescue me’ star comes out on 9/11 & ‘rescue me’ character believes 9/11 was an inside job… and so does the actor playing him