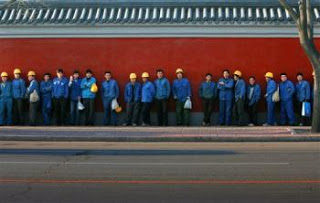 from independent: An estimated 26 million poor rural Chinese are now without jobs after pinning their hopes on the once-booming manufacturing sector, where work has dried up due to the global economic slowdown, a government advisory body said. The figure was released one day after Beijing warned of "possibly the toughest year" since the turn of the century, calling for the development of agriculture and rural areas to offset the economic fallout. Though many Chinese cities have seen double-digit growth in recent years, the countryside has lagged behind, forcing peasants to seek urban factory jobs. A recent government survey showed that more than 15 per cent of China's 130 million migrant workers have returned to their hometowns recently, where they are now unemployed, said Chen Xiwen, director of the Central Rural Work Leading Group. Another 5 million to 6 million new migrants enter the workforce each year, Mr Chen added. "So, if we put those figures together, we have roughly 25 to 26 million rural migrant workers who are now coming under pressures for employment," the official said.

banks closed in florida, maryland & utah
from bloomberg: Banks in Florida, Maryland and Utah were closed yesterday [jan30] as regulators wrapped up the busiest month for failures since the housing slump began in 2006. Ocala National Bank in Florida and Suburban Federal Savings Bank of Crofton, Maryland, were shut by federal regulators, according to statements sent by the Federal Deposit Insurance Corp. MagnetBank of Salt Lake City was seized by the Utah Department of Financial Institutions. The banks had total assets of $876.4 million and deposits of $790 million. Six banks have failed this month as tumbling home prices and a 16-year high in unemployment boost foreclosures. The FDIC classified 171 banks as “problem” in the third quarter, a 46 percent jump from the previous period amid the worst housing crisis since the Great Depression.

you're the crisis!: protesters rally against world economic forum 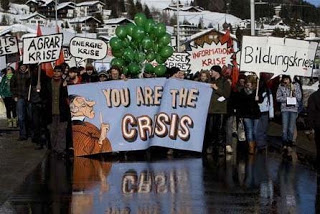 from reuters: Hundreds of people rallied in Geneva and Davos Saturday to protest against the World Economic Forum, saying the elite gathered for it annual meeting are not qualified to fix the world's problems. Carrying banners reading 'You are the Crisis' and throwing snowballs, several hundred protesters marched to fences surrounding the heavily guarded Hotel Seehof in the Davos ski resort, where many world leaders and business people stay during the forum. Protester Alex Heideger, a member of the Davos Green Party, said these were the people to blame for the economic mess. "It's the same people who came last year and said the world economic situation is fine, and now we're in a financial crisis. Now it's the taxpayer who has to solve the whole problem. It's people like you and me who have to pay for it with their tax money," he said. 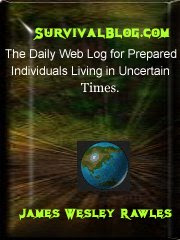 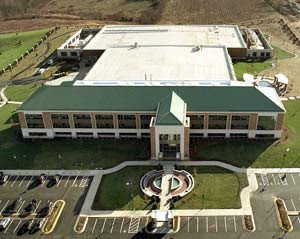 from ap: The Justice Department says it foiled a plot by a fired Fannie Mae contract worker in Maryland to destroy all the data on the mortgage giant's 4,000 computer servers nationwide. The U.S. Attorney's Office says 35-year-old Rajendrasinh Makwana, of Glen Allen, Va., is scheduled for arraignment Friday in U.S. District Court in Baltimore on one count of computer intrusion. U.S. Attorney Rod Rosenstein says Makwana was fired Oct. 24. Rosenstein says that on that day, Makwana programmed a computer with a malicious code that was set to spread throughout the Fannie Mae network and destroy all data this Saturday. Makwana's federal public defender did not immediately return a call seeking comment. Washington-based Fannie Mae is the largest U.S. mortgage finance company.