widow from 9/11 attacks among new york crash victims
from dpa: A woman who had lost her husband in the September 11, 2001 terror attacks on the World Trade Center was among those killed in the late Thursday air crash in New York state, her sister said early Friday. “We know that she was on that plane,” Sue Bourque was quoted by the Buffalo News as saying about her sister Beverly Eckert, who had been waiting at Buffalo airport to pick her sister up when the Continental Airlines plane crashed some 10 kilometres away. “And now she is with him,” she added, referring to her sister’s husband who was among the some 3,000 killed in the twin airplane attacks on the WTC towers. Eckert was co-chairwoman of Voices of Sept. 11, a group pushing for a formal commission to investigate intelligence failures before the terror attacks and for a proper memorial to the victims.

eerie audio: ‘no response from that aircraft’

and just 7 days before her death, beverly eckert & other 9/11 victims family members met the obamessiah 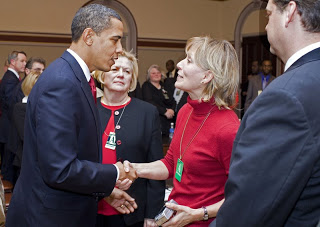 update: US plane was on autopilot in icy crash that killed 50
from dpa: Amidst recovery efforts for the remains of 50 victims of an icy New York airplane crash, investigators Sunday said the aircraft was on autopilot, a violation of suggested guidelines when icing on the wings is a danger but in keeping with legal requirements. Steve Chealander, spokesman for the National Transportation Safety Board (NTSB) described in broadcast remarks the sickening pitch and roll of Continental Express flight 3407 in its last 26 seconds before it crashed into a house outside Buffalo, New York, on Thursday night, killing all 48 passengers and crew and one person in the house. The information was gleaned from the flight data recorder recovered from the wreckage… “The flight manual for the Dash 8-Q400 craft advises that the auto- pilot be disengaged during ‘severe icing conditions,” Chealander said. “What we’ve seen thus far (has not indicated) it was severe icing.”