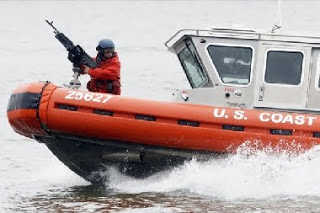 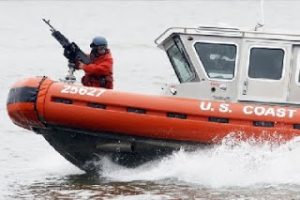 from ap: A Coast Guard training exercise in the Potomac River near the Pentagon sparked confusion amid Friday's commemorations of the Sept. 11 anniversary. Media reports that shots were being fired in the river sent FBI agents scrambling to the scene and led the nearest airport to briefly ground flights.

The Coast Guard said it would review how its exercise led to TV news reports that were "based on overheard radio calls made over a training frequency" normally used only by the Coast Guard.

The Coast Guard said such exercises go on every day in and around U.S. ports, and the Secret Service is not normally notified. Erroneous live cable news reports on CNN and Fox had said that the Coast Guard was firing shots on the river. CNN reported the Coast Guard had fired 10 rounds at a suspicious boat, and showed vessels circling in the water - near the bridge President Barack Obama's motorcade crossed on the way to a memorial at the Pentagon earlier Friday morning.

The president was not in the area when the training exercise took place, Coast Guard Chief of Staff John Currier said at a news conference. Currier said as part of its exercise, the Coast Guard aired simulated instructions to participants to fire 10 rounds and someone said "bang, bang, bang" to simulate compliance.

...and the white house says they're ok with coast guard exercise,
just like they were ok with the 'air farce one' fiasco in april...