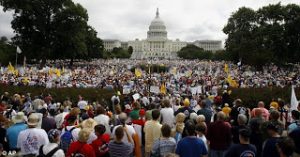 from daily mail: Up to two million people marched to the U.S. Capitol today, carrying signs with slogans such as “Obamacare makes me sick” as they protested the president’s health care plan and what they say is out-of-control spending. The line of protesters spread across Pennsylvania Avenue for blocks, all the way to the capitol, according to the Washington Homeland Security and Emergency Management Agency. People were chanting “enough, enough” and “We the People.” Others yelled “You lie, you lie!” and “Pelosi has to go,” referring to California congresswoman Nancy Pelosi… Today’s protests imitated the original Boston Tea Party of 1773, when colonists threw three shiploads of taxed tea into Boston Harbour in protest against the British government under the slogan ‘No taxation without representation‘.