A Brief History Of The Skull & Bones Society 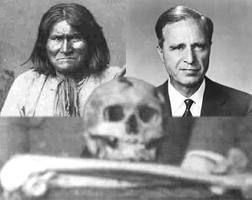 from time.com: On Feb. 17, the 100th anniversary of Geronimo’s death, descendants of the Apache warrior filed a federal lawsuit against the secretive Skull and Bones society of Yale University demanding that the group — which it claims is in possession of Geronimo’s remains — return them to his family. “I believe strongly from my heart that his spirit was never released,” Geronimo’s great-grandson Haryln Geronimo, 61, told the National Press Club.

As legend has it, Prescott S. Bush — the father of President George H.W. Bush and grandfather to President George W. Bush — dug up Geronimo’s grave in 1918 with the help of several other “Bonesmen,” as members of the society are known, and stole the warrior’s skull, two bones and some riding gear from his grave at Fort Sill, Okla. The society allegedly put the remains on display at the “The Tomb,” an imposing, windowless crypt in New Haven, Conn. that has served as the group’s headquarters since its founding in 1832.

Conspiracy theories about the Skull & Bones Society are almost as old as the society itself. The group has been blamed for everything from the creation of the nuclear bomb to the Kennedy assassination. It’s been aped in bad teen horror films and satirized — along with fellow conspiracy-group targets the Freemasons and the Illuminati — in The Simpsons. Even CNN has done a segment on the Prescott grave-robbery saga.


Minus the trappings of wealth, privilege and power, Skull and Bones could be a laughably juvenile club for Dungeons-and-Dragon geeks. But its rumored alumni have made up a disproportionately large percentage of the world’s most powerful leaders. (One historian has likened the society’s powers to that of an “international mafia,” for as another writer put it, “the mafia is, after all, the most secret of societies.”) Bonesmen have, at one time, controlled the fortunes of the Carnegie, Rockefeller and Ford families, as well as posts in the Central Intelligance Agency, the American Psychological Association, the Council on Foreign Relations and some of the most powerful law firms in the world.

During the 2004 presidential election, the Republican and Democratic candidates were both former Bonesmen, though neither would say much about the subject. “It’s a secret,” John Kerry said when asked about his membership; “So secret, I can’t say anything more,” George W. Bush wrote in his autobiography, as if to complete Kerry’s sentence.

A young Yale junior named William Russell founded the group after spending a year in Germany among members of some of the most mystical and elite clubs in the world, including organizations that mimicked the Enlightenment-era Illuminati. Russell returned to the U.S. determined to found a secret society of his own and “tapped” Alfonso Taft, whose son would later become President William H. Taft, to be among the first members of “The Brotherhood of Death,” or as it was more formally known, “The Order of the Skull and Bones.” Members worshipped Eulogia, a fake goddess of eloquence, glorified pirates and reportedly hatched schemes of world domination at the “Tomb” — which is rumored to have a landing pad on the roof for the society’s private helicopter.

Skull and Bones formed at Yale University, the third-oldest school in the U.S. and an institution “known for its strange, Gothic elitism and its rigid devotion to the past,” according to journalist (and Yale secret society alumnae) Alexandra Robbins, who published Secrets of the Tomb in 2002. Skull and Bones is not the only secret society at the school either: others include the Scroll and Key, Wolf’s Head, Berzelius and Book and Snake, all of which like keeping tabs on one another, some in the form of dossiers that include “reliability ratings.” Each group picks its members in a highly confidential manner and subjects them to rounds of occult hazing rituals — what pledging a fraternity might be like, perhaps, at Hogwarts.

But whether a young Henry Luce (founder of Time magazine) actually laid naked in a coffin and told the tales of his early sex life during his Skull and Bones initiation, or if William F. Buckley jumped into a mud pie as part of his hazing, or whether any of the three Bush Bonesman (Prescott, H.W., and W.) really received a gift of $15,000 and the guarantee of a lifetime of financial security upon being selected — all these rumors, publicized over the years by Esquire, The Atlantic Monthly, the New York Times and numerous independent book authors, might never be known.

The group has remained silent about the lawsuit from Geronimo’s descendants. But in a time when the Internet is opening up previously private information to the world and even Swiss banks are spilling their secrets, the activities of the Skull & Bones society might not be able to stay so clandestine for long.