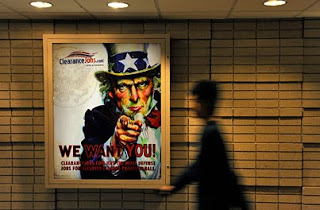 A Hidden World, Growing Beyond Control

from washington post: “Top Secret America” is a project nearly two years in the making that describes the huge national security buildup in the United States after the Sept. 11, 2001, attacks.

When it comes to national security, all too often no expense is spared and few questions are asked – with the result an enterprise so massive that nobody in government has a full understanding of it. It is, as Dana Priest and William M. Arkin have found, ubiquitous, often inefficient and mostly invisible to the people it is meant to protect and who fund it.

The articles in this series and an online database at topsecretamerica.com depict the scope and complexity of the government’s national security program through interactive maps and other graphics. Every data point on the Web site is substantiated by at least two public records.

Because of the nature of this project, we allowed government officials to see the Web site several months ago and asked them to tell us of any specific concerns. They offered none at that time. As the project evolved, we shared the Web site’s revised capabilities. Again, we asked for specific concerns. One government body objected to certain data points on the site and explained why; we removed those items. Another agency objected that the entire Web site could pose a national security risk but declined to offer specific comments.