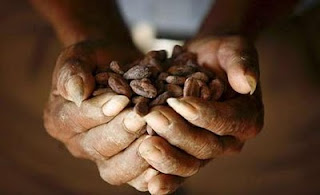 from telegraph: Even Willy Wonka might struggle to use this much chocolate. Yesterday, somebody bought 241,000 tonnes of cocoa beans. The purchase was enough to move the entire global cocoa market, sending the price to the highest level since 1977, and triggering rumours and intrigue in the City. It is unclear which person, or group of traders, was behind the deal, but it was the largest single cocoa trade for 14 years. The cocoa beans, which are sitting in warehouses either in The Netherlands, Hamburg, or closer to home in London, Liverpool or Humberside is equivalent to the entire supply of the commodity in Europe, and would fill more than five Titanics. They are worth £658 million.