Editor’s note: Note the lengths ABC goes to convince us that people who believe the government pulled off 9/11 and had Kennedy assassinated are akin to the guy who thinks the postal worker is after him. It has filed this “report” under “Health > Mind & Mood News.” 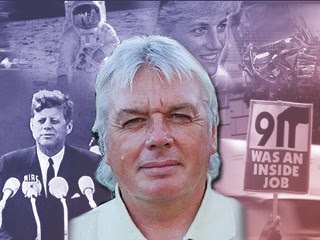 from abc news: A man standing on a street corner with a sign reading “the lizard people rule you all,” or, “my neighbors are spying on me for the government” isn’t likely to get many supporters.

But give that man a Web site template, or let him produce some slick videos on YouTube and, lo and behold, he may have thousands of people across the world supporting him. Such is the story of several extraordinarily popular conspiracy theorists and theories online today.

Take the victims of gang stalking – a subculture of people who think their friends and neighbors are all secret government spies ready to turn them over to the authorities. The movement has recently spawned gang stalking support groups, forums and advice Web sites.

Or take the former journalist and BBC sports announcer, David Icke, for example.

Icke was laughed out of the public eye in the early ’90s when he started wearing only turquoise and explaining that voices had sent him on an important mission to save the earth. Decades later, Icke has written books, has fans in 47 countries and can gather a crowd of 2,500 people in a city simply by posting a date for a lecture on his Web site.

The cornerstone of Icke’s theories is that a malicious race of lizard people – the “shadowy elite” – rules the world and all its political leaders primarily by controlling the media and orchestrating fear-mongering catastrophes, such as Sept. 11. Icke said he already has speeches lined up for 2009 in Los Angeles, Mexico, Croatia, New Zealand and Australia.

The Internet has always been a forum for fringe ideas, but success like Icke’s, and subcultures built on paranoid theories like gang stalkers, points to an understudied corner in psychiatry: Who are the people who believe such theories in the quiet of their homes, and what does such behavior mean for a person teetering on the edge of mental illness?

“It’s not an area that has been studied very well,” said Angus MacDonald, a spokesperson for the mental health charity NARSAD, and an associate professor of psychology at the University of Minnesota in Minneapolis.