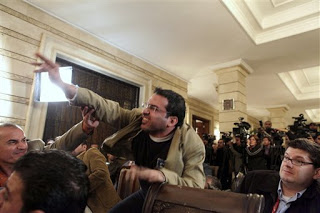 shoes thrown at bush in protest of final visit to iraq

i gotta hand it to bush, his dodging reflexes are amazing...

in final iraq visit, bush ducks a pair of shoes

from raw story: In his surprise final visit to Iraq this weekend, President Bush got an unusual reminder of his lack of popularity. They were about a size 10.

An Iraqi journalist throw his shoes at Bush during a meeting with Iraqi Prime Minister Nouri al-Maliki in Baghdad. Bush ducked both throws and neither leader was hit.

Yelling "This is the end!" and calling Bush a "dog" in Arabic, the man was later identified as Muntadar al-Zaidi, a correspondent for Al-Baghdadia television, an Iraqi-owned station based in Cairo, Egypt. Bush smiled uncomfortably and Maliki looked strained.

"It doesn't bother me," Bush said, trying to calm down flustered reporters that quickly apologized for the actions of their colleague. "I didn't feel the least threatened by it."

"So what if the guy threw his shoe at me?" Bush told a reporter on Sunday. "Let me talk about the guy throwing his shoe. It's one way to gain attention. It's like going to a political rally and having people yell at you. It's like driving down the street and having people not gesturing with all five fingers...These journalists here were very apologetic. They...said this doesn't represent the Iraqi people, but that's what happens in free societies where people try to draw attention to themselves."

White House spokeswoman Dana Perino suffered a black eye from a microphone that hit her in the ensuing chaos.

The shoe-thrower was wrestled to the ground and taken away. In Arab culture, throwing shoes is a grave show of disrespect. According to colleagues, al-Zaidi had survived a kidnapping by Shiite militiamen last year.

After U.S. troops pulled down a statue of former dictator Saddam Hussein in 2003, Iraqi bystanders tossed shoes at it, according to news reports at the time.

During his visit to Iraq, Bush called the Iraq war hard but necessary for the protection of the United States and the freedom of the Iraqi people, adding that the two nations are on "solid footing." 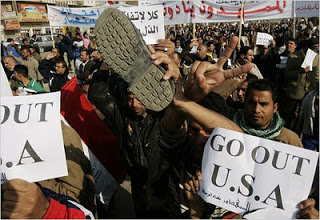 from danger room: The flying shoe incident has everyone here talking. To recap: Iraqi journalist Muntader al-Zaidi was detained after flinging his shoes at President George W. Bush during a press conference yesterday in Baghdad’s Green Zone. Muntader seems to have struck a chord with Iraqis; hitting someone with a shoe is a deep insult in this country. The New York Times Baghdad Bureau blog has an excellent roundup of reactions from around the country. The Times even tracked down Muntader's brother, who said he was "proud of his brother — as all Iraqis would be."

update2: al-zaidi in camp cropper prison (being tortured?)
from roads to iraq: Iraqi TV al-Sharqiya just reported on the news that AL-Zaidi is transferred to Camp Cropper prison [the Airport prison, managed by the American forces]. The TV Channel announced that Al-Zaidi is in a difficult condition, with broken ribs and signs of tortures on his thighs. Also he can not move his right arm. P.S. I am just telling you what I heard on TV.

update3: shoe-throwing iraqi journalist ‘beaten in custody'
from thinkprogress: Muntader al-Zaidi, the now-infamous shoe-hurling Iraqi journalist, has reportedly been “beaten in custody,” according to the BBC. Al-Zaidi’s brother reports that the journalist is suffering from a broken hand, broken ribs, and internal bleeding. Yesterday, TV al-Sharqiya in Iraq reported that the al-Zaidi had “signs of tortures on his thighs.” Meanwhile, thousands of Iraqis have taken to streets on Tuesday for second day to demand al-Zaidi’s release.

update4: bush & the shoe: full uncut video
from infowars: As Bush makes a crude joke about a “size 10 shoe,” Muntader al-Zaidi can be heard screaming in the background. The corporate media, of course, will not show you the entire video.

update5: bush shoe-thrower 'too injured' to appear in court 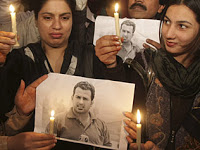 from raw story: The Iraqi journalist who became an instant media star for hurling his shoes at US President George W. Bush appeared on Wednesday before a judge investigating the incident. Muntazer al-Zaidi, 29, a television reporter who relatives and colleagues said acted because he "detested" Bush and America, was brought before the judge in the high-security Green Zone in the heart of Baghdad, his brother, Dhargham, said. Al-Zaidi appeared before the judge in his jail cell "because he is too injured to appear in a courtroom," Australia's Herald Sun quotes the brother as saying. "The al-Zaidi family went to Baghdad's Central Criminal Court expecting to attend a hearing," reports the paper. The brother said "the family was told that the investigative judge went to see [Muntazer] al-Zaidi in jail, and to return in eight days," which Dhargham took to mean that his brother "was severely beaten and they fear that his appearance could trigger anger at the court."

update6: video: protesters celebrate shoe-throwing
journalist in protest outside white house
from raw story: A small group of anti-war activists gathered outside the White House Wednesday to show solidarity with the Iraqi journalist who threw his shoes at President Bush last weekend.

beyond the flying size-10: a fighting footwear arsenal 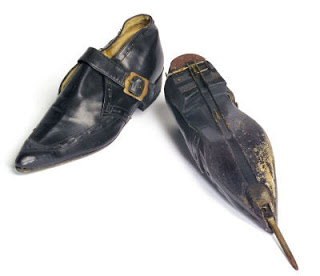 from danger room: The shoe-hurling incident earlier this week, in which President Bush narrowly dodged a couple of Size 10 projectiles, has become a full-fledged phenomenon. So it's about time Danger Room took a closer look at footwear-based weaponry. The thrown boot is a traditional non-lethal weapon. However, technically it might fall into the hazardous classification. "Within the nonlethal community, it is generally accepted that any impact exceeding 58 foot-pounds of kinetic energy will result in a potential fatality," according to an Army article on engineering non-lethal artillery projectiles. That's "roughly one-half the impact one would feel being hit by a baseball thrown by a professional pitcher." And there are some people out there capable of hurling a boot with considerable force.