addicted to cheese? here’s why 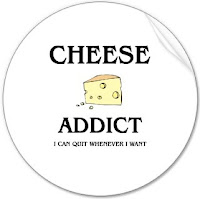 from care2: Ever felt like you couldn’t give up cheese? Ever think it might actually be a drug? The surprising news is that as far back as the 1980’s researchers have known that cheese contains trace amounts of morphine. Seriously. In 1981, Eli Hazum and his colleagues at Wellcome Research Laboratories reported traces of the chemical morphine, a highly addictive opiate. It turns out that morphine is found in cow milk and human, purportedly to ensure offspring will bond very strongly with their mothers and get all the nutrients they need to grow. Researchers also discovered the protein casein, which breaks into casomorphins when it is digested and also produces opiate effects. In cheese, casein is concentrated, and so is the level of casomorphins, so the pleasurable effect is greater. Neal Barnard, MD said, “Since cheese is processed to express out all the liquid, it’s an incredibly concentrated source of casomorphins — you might call it dairy crack.”