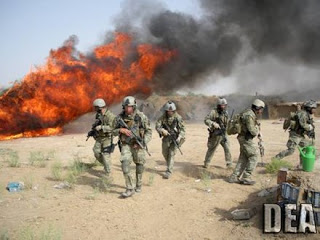 agents say dea is forcing them illegally to work in afghanistan

from mcclatchy: As the Obama administration ramps up the Drug Enforcement Administration's presence in Afghanistan, some special-agent pilots contend that they're being illegally forced to go to a combat zone, while others who've volunteered say they're not being properly equipped.

In interviews with McClatchy, more than a dozen DEA agents describe a badly managed system in which some pilots have been sent to Afghanistan under duress or as punishment for bucking their superiors.

Such complaints, so far mostly arising from the DEA's Aviation Division, could complicate the Obama administration's efforts to send dozens of additional DEA agents to Afghanistan as part of a civilian and military personnel "surge" that aims to stabilize the country.