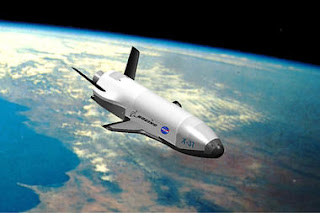 from ap: After a decade of development, the Air Force this month plans to launch a robotic spacecraft resembling a small space shuttle to conduct technology tests in orbit and then glide home to a California runway.

The ultimate purpose of the X-37B Orbital Test Vehicle and details about the craft, which has been passed between several government agencies, however, remain a mystery as it is prepared for launch April 19 from Cape Canaveral, Fla.

"As long as you're confused you're in good shape," said defense analyst John Pike, director of Globalsecurity.org. "I looked into this a couple of years ago – the entire sort of hypersonic, suborbital, scramjet nest of programs – of which there are upwards of a dozen. The more I studied it the less I understood it."

The quietly scheduled launch culminates the project's long and expensive journey from NASA to the Pentagon's research and development arm and then to a secretive Air Force unit.

Hundreds of millions of dollars have been spent on the X-37 program, but the current total has not been released.

The launch date, landing sites and a fact sheet were released by Air Force spokeswoman Maj. Angie I. Blair. She said more information would be released soon, but questions on cost and other matters submitted by e-mail weren't answered by Friday.

While the massive space shuttles have been likened to cargo-hauling trucks, the X-37B is more like a sports car, with the equivalent trunk capacity.

Built by Boeing Co.'s Phantom Works, the 11,000-pound craft is 9 1/2 feet tall and just over 29 feet long, with a wingspan of less than 15 feet. It has two angled tail fins rather than a single vertical stabilizer.

Unlike the shuttle, it will be launched like a satellite, housed in a fairing atop an expendable Atlas V rocket, and deploy solar panels to provide electrical power in orbit.

The Air Force released only a general description of the mission objectives: testing of guidance, navigation, control, thermal protection and autonomous operation in orbit, re-entry and landing.

The mission's length was not released but the Air Force said the X-37B can stay in orbit for 270 days. The primary landing site will be northwest of Los Angeles at coastal Vandenberg Air Force Base.

The significance of the X-37B is unclear because the program has been around for so long, said Peter A. Wilson, a senior defense research analyst for the RAND Corp. who several years ago served as executive director of a congressional panel that evaluated national security space launch requirements.

"From my perspective it's a little puzzling as to whether this is the beginning of a program or the end of one," Wilson said Friday in a telephone interview from Washington, D.C.

As NASA anticipated the end of the shuttle, the X-37B was viewed as a working prototype of the next-generation design of a fully reusable spacecraft, but the space agency lost interest and the Air Force picked it up, Wilson said.

"It's viewed as a prototype of a vehicle that could carry small payloads into orbit, carry out a variety of military missions and then return to Earth," he said.

The Air Force statement said the X-37 program is being used "to continue full-scale development" and orbital testing of a long-duration, reusable space vehicle.

Wilson sees the upcoming launch as "a one-shot deal."

He acknowledged that he does not know if there is a classified portion of the program but said there is no evidence of a second vehicle being built to follow the prototype. In aerospace, a prototype typically remains a test vehicle used to prove and improve designs for successive operational vehicles.

To fully function as a completely reusable launch system there would also have to be development of a booster rocket that is capable of landing itself back on Earth to be reassembled with the spacecraft, according to Wilson, who does not see any support for such an initiative.

Wilson also said the usefulness of payloads such as small military satellites is in question, which would undercut the need for the launch system.

The X-37B is now under the direction of the Air Force's Rapid Capabilities Office. Its mission is to speed up development of combat-support systems and weapons systems.

Operating since 2003, the office has worked on several things, including upgrading the air defenses around the nation's capital as an anti-terrorism measure and assessing threats to U.S. combat operations, according to an Air Force fact sheet.

NASA began the X-37 program in 1999 in a cooperative deal with Boeing to roughly split the $173 million cost of developing an experimental space plane. The Air Force put in a small share.

The X-37, initially intended to be carried into space by shuttles in 2003, was a larger version of the Air Force X-40A, a concept for a "Space Maneuver Vehicle" to put small military satellites in orbit. The X-40A was dropped from a helicopter in glide and landing tests but was never capable of actual space flight.

In 2002, NASA awarded Boeing a $301 million contract to complete a version of the X-37 to be used in approach and landing tests and begin designing an orbital version that would fly in 2006.

But in 2004 NASA turned the project over to the Defense Advanced Research Projects Agency, the Defense Department's research and development arm. In 2006, the X-37 was put through captive-carry and drop tests using Mojave-based Scaled Composite LLC's White Knight, the jet that launched SpaceShipOne on the first private suborbital manned space flights.

The Air Force then began work on the X-37B, projecting it would fly in 2008. An Air Force News story at the time reported that the first one or two flights would check out the performance of the vehicle itself and then it would become a space test platform with unspecified components flown in its experiment bay.