ground zero: soldiers of the one – the pale horse psyop 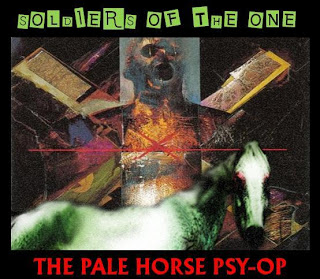 from clyde lewis: At long last this past week, I was able to catch upon all of my favorite science fiction shows. I don’t get much of a chance to watch them on TV because most of the television in my house is controlled by my young boy. So I sneak into my room and watch the onslaught of predictive programming that is now in plain sight in most science fiction shows now on hulu.

I was particularly interested in the television show “V” the show about the cold blooded reptilian visitors that came from nowhere to offer help to the earthlings. The reptiles disguise themselves as humans and covertly begin their virtual takeover of the planet. It is one of the most obvious programs that give us a hint as to what is going on. The Visitors want to give us health care.

In fact, the alien visitors call it Universal health care. They also want to create preventative health care so they offer everyone on earth a Vaccine that they call a “vitamin shot” in order to facilitate good will. The truth is that the vaccine contains something that damages good DNA making the host sick and easily controlled.

Imagine, a group of aliens saying that they are here to help, to bring change and to cure the healthcare woes of the planet. All you need to do is trust that their vaccine is going to help you and not eventually kill you…

It is no coincidence that we are now in the midst of a health care debate. It is no accident that the elite of the world are talking about culling the planet to keep it green. It is no coincidence that the numbers all fall conveniently in line with political magic. There is definite “cause and effect” with regard to the new changes in policies that attack our liberties. We are now realizing that there are powers far greater than us, giving clues and triggering mechanisms to nudge us into a full and horrific Armageddon.

We have escalated the revelation of the method. They are planning on our predictability and our trust. Sometimes paranoia gets a bad rap. Especially when you know they are out to get you.

2 responses to “ground zero: soldiers of the one – the pale horse psyop”