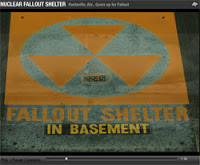 from ap: In an age of al-Qaida, sleeper cells and the threat of nuclear terrorism, Huntsville is dusting off its Cold War manual to create the nation's most ambitious fallout-shelter plan, featuring an abandoned mine big enough for 20,000 people to take cover underground.

Others would hunker down in college dorms, churches, libraries and research halls that planners hope will bring the community's shelter capacity to 300,000, or space for every man, woman and child in Huntsville and the surrounding county.

Emergency planners in Huntsville - an out-of-the-way city best known as the home of NASA's Marshall Space Flight Center - say the idea makes sense because radioactive fallout could be scattered for hundreds of miles if terrorists detonated a nuclear bomb.

"If Huntsville is in the blast zone, there's not much we can do. But if it's just fallout... shelters would absorb 90 percent of the radiation," said longtime emergency management planner Kirk Paradise, whose Cold War expertise with fallout shelters led local leaders to renew Huntsville's program.