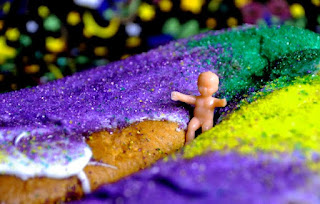 from latimes: At first sight, it comes across as, well, a little unusual. A large wreath-shaped cake bedazzled in vibrant shades of purple, green and gold — there's nothing subtle about it. It might be flavored simply with a touch of cinnamon sugar, or maybe it's decked out with any of a number of creative fillings. Help yourself to a slice, or two — just be careful you don't accidentally bite into the plastic baby.

Behold the wonder that is the king cake. For many, a New Orleans-style Mardi Gras is simply not complete without it. Though it may look rather odd — perhaps even gaudy — on its own, the king cake fits right in with a colorful season of festive parade floats and marching bands, masked revelers and flying beads as far as the eye can see.

Largely drawn from Catholic tradition, Mardi Gras is the culmination of the Carnival season, a magical stretch of the calendar that spans from Jan. 6 (Epiphany, also called Three Kings Day) through Mardi Gras, or Fat Tuesday, the last hurrah before Ash Wednesday and the sobering start to Lent. Variations of the cake span a number of Catholic-influenced cultures and countries, as varied as the French gateau de rois and Mexico's rosca de reyes.