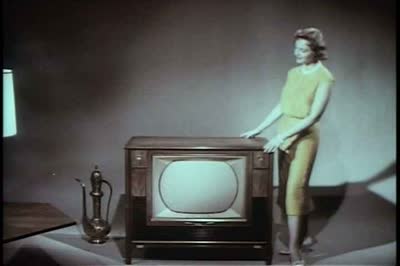 An Occult History of the Television Set

Andriopoulos's book puts the TV into a long line of other "optical media" that go back at least as far as weird Renaissance experiments involving technologically-induced illusions, such as concave mirrors, magic lanterns, disorienting walls of smoke, and other "ghostly apparitions" and "phantasmagoric projections" created by speciality devices. These were conjuring tricks, sure, but they relied on sophisticated understandings of such basic things as light, shadow, and acoustics, making an audience see-and believe in-an illusion.


A Magic Lantern for Seeing Events at a Distance

What's central to Andriopoulos's argument is that these devices included instruments specifically designed for pursuing supernatural research-for visualizing the invisible and showing the subtle forces at work in everyday life. In his words, these were "devices developed in occult research"-including "televisionlike devices"-invented in the name of spiritualism toward the end of the 19th century that later "played a constitutive role in the emergence of radio and television."

So, while the television itself-the living room object you and I most likely know-might not be a supernatural mechanism, it nonetheless descends from a strange and convoluted line of esoteric experimentation, including early attempts at controlling electromagnetic transmissions, radio waves, and even experiencing various forms of so-called "remote viewing."

Indeed, in Andriopoulos's version of television's origin story, the notion of spiritual clairvoyance was very much part of the overall intention of the device.

Clairvoyance-a word that literally means clear vision, but that has now come to refer almost exclusively to the supernatural ability to see things at a distance or before they even happen-offered an easy metaphor for this new mechanism. Television promised clairvoyance in the sense that a TV could allow seeing without interference or noise. It would give viewers a way to tune into and clearly see a broadcast's invisible signals-as if a remote-viewing apparatus with forgotten supernatural intentions is now ensconced in nearly everyone's home.

I'll leave it to curious readers to look for Andriopoulos's book itself-with the caveat that it is quite heavy on German idealism and rather light on real tech history-but it is worth mentioning the fact that at least one other technical aspect of the 20th-century television also followed a very bizarre historical trajectory.

The cathode ray-a vacuum tube technology found in early televisions sets-found an unexpected and extraordinary use in the work of gonzo Norwegian inventor Kristian Birkeland.

Birkeland used cathode rays in his attempt to build a doomed scale model of the solar system.
I genuinely love this story and, although I have written about it elsewhere, it is worth a quick recap here. Birkeland was the first scientist to correctly hypothesize the origins of the Northern Lights, rightly deducing from his own research of electromagnetic phenomena that the aurora borealis was caused by interactions between charged particles from the sun and the earth's own magnetic field. This produced the extraordinary displays of light Birkeland had seen in the planet's far north.

However, as Birkeland fell deeper into an eventually fatal addiction to extreme levels of caffeine and a slow-acting hypnotic drug called Veronal, he became fixated on the weirdly impossible goal of exactly modeling the Northern Lights in miniature.

As author Lucy Jago tells Birkeland's amazing story in her book The Northern Lights, he was intent on producing a kind of astronomical television set: a "televisionlike device," in Andriopoulos's words, whose inner technical workings would model the electromagnetic secrets of the universe.

As Jago describes his project, Birkeland "drew up plans for a new machine unlike anything that had been made before." It resembled "a spacious aquarium," she writes, a shining box that would act as "a window into space."

The box would be pumped out to create a vacuum and he would use larger globes and a more powerful cathode to produce charged particles. With so much more room he would be able to see effects, obscured in the smaller tubes, that could take his Northern Lights theory one step further-into a complete cosmogony, a theory of the origins of the universe.

It was a multifaceted and extraordinary undertaking. With it, Jago points out, "Birkeland was able to simulate Saturn's rings, comet tails, and the Zodiacal Light. He even experimented with space propulsion using cathode rays. Sophisticated photographs were taken of each simulation, to be included in the next volume of Birkeland's great work, which would discern the electromagnetic nature of the universe and his theories about the formation of the solar system."

However, this "spacious aquarium" was by no means the end of Birkeland's manic (tele)vision.
His ultimate goal-devised while near-death in a hotel room in Egypt-was to construct a vacuum chamber partially excavated into the solid rock of a mountain peak, an insane mixture of tomb, church, and planetarium.

The resulting cathedral-like space-think of it as an immersive, landscape-scale television set carved directly into bedrock-would thus be an artificial cavern inside of which flickering electric mirages of stars, planets, comets, and aurorae would spiral and glow for a hypnotized audience.

Birkeland wrote about this astonishing plan in a letter to a friend. He was clearly excited about what he called a "great idea I have had." It would be-and the emphasis is all his-"a museum for the discovery of the Earth's magnetism, magnetic storms, the nature of sunspots, of planets-their nature and creation."

His description is worth quoting at length; you can almost feel the caffeine. "On a little hill," he scribbled, presumably on hotel stationery, perhaps even with a little image of the pyramids embossed in the letterhead, reminding him of the ambitions of pharaohs, "I will build a dome of granite, the walls will be a meter thick, the floor will be formed of the mountain itself and the top of the dome, fourteen meters in diameter, will be a gilded copper sphere. Can you guess what the dome will cover? When I'm boasting I say to my friends here 'next to God, I have the greatest vacuum chamber in the world.' I will make a vacuum chamber of 1,000 cubic metres and, every Sunday, people will have the opportunity to see a ring of Saturn ten metres in diameter, sunspots like no one else can do better, Zodiacal Light as evocative as the natural one and, finally, auroras... four meters in diametre. The same sphere will serve as Saturn, the sun, and Earth, and will be driven round by a motor."

Every Sunday, as if attending Mass, congregants of this artificial solar system would thus hike into the immersive TV of Birkeland's strange astronomy, hypnotized by its explosive whirls of electromagnetic wonder.

Seen in the context of the occult mechanisms, psychic TVs, and clairvoyant media technologies of Stefan Andriopoulos's book, Birkeland's story reveals just one particularly monumental take on the other-worldly possibilities of televisual media, bypassing the supernatural altogether to focus on something altogether more extreme: a direct visual engagement with nature itself, in all its blazing detail.

Of course, Birkeland's cathode ray model of the solar system might not have conjured ghosts or visualized the spiritual energies that Andriopoulous explores in his book, but it did try to bring the heavens down to earth in the form of a 1,000 cubic meter television set partially hewn from raw granite.

It was the most awesome TV ever attempted, a doomed and never-realized invention that nonetheless puts all of today's visual media to shame.