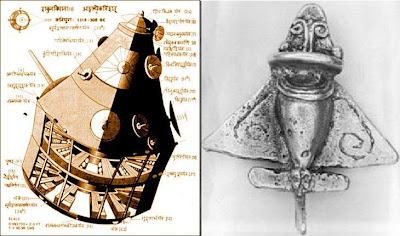 The late Dr. V Raghavan, a sanskrit scholar after fifty years of research, could only conclude as long ago as 4,000 BC, “there is a just a mass of fascinating information about flying machines, even fantastic science fiction weapons, that can be found in translations of the Vedas (scriptures), Indian epics, and other ancient Sanskrit text.” Our knowledge of these craft come primarily from the Indian epics, Mahabharata and Ramayana. A nice synopsis of the two epics and their ages can be read here. In the earlier epic Ramayana, it’s related, “Vimanas, or flying machines, that navigated at great heights with the aid of quicksilver and a great propulsive wind.” In the Mahabharata, Bhima, the second eldest son of Pandu, “...flew with his vimana on an enormous ray which was as brilliant as the sun and made a noise like the thunder of a storm.”

The ancient Indian flying machines were first referred to in literature as Ratha(chariots), which later gave way to Vimana(flying objects).  There were three classes according to this source, craft travelling 1) place to place, 2) country to country and 3) between planets.

There are ominous undertones in the Ramayana and Mahabharata epics, as they are depicted as occurring in different ages or “yugas,” the former in the Treta Yuga and the latter in the Dwapara Yuga. In Hindu mythology, there is a cycle of four yugas, the best and least corrupt is the Krita Yuga, compared to a cow standing on all four legs and most stable.  The Treta and Dwapara are “Ages of Three and Two” and we are currently in the Kali Yuga-the worst age of all–the most unstable and compared to a cow teetering on only one leg! There is an insightful You Tube video, which refers to this decline as aircraft devolution, “Ancient Indian Aircraft“. Are we, in fact, on a 3.4 million year slide in lost knowledge and technology?