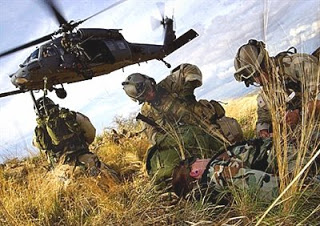 ‘angel thunder’: major international drill on US soil on dec1-12

from arizona daily star: To troops downed in combat, few sights are sweeter than the approach of military rescuers. In a few weeks, Tucson will be at the center of efforts to speed up that lifesaving process. Personnel from around the globe will converge at Davis-Monthan Air Force Base from Dec. 1 to Dec. 12 for the largest rescue exercise of its kind. The effort, dubbed Angel Thunder, will involve the U.S. Army and Air Force, troops from Germany, Chile, Colombia and observers from Canada, Mexico, Brazil and Pakistan. Several non-military U.S. agencies such as the State and Justice departments, the National Geospatial-Intelligence Agency and the National Reconnaissance Office, also will take part in the drills, which aim to smooth interaction between military branches, allied nations and civilian agencies. With about 450 personnel involved, Angel Thunder "is the most complex and largest Department of Defense personnel- recovery exercise to date," said a news release from Air Combat Command in Langley, Va. D-M will be at the hub of the effort, but most of the mock rescue action will take place elsewhere in Arizona and in New Mexico.