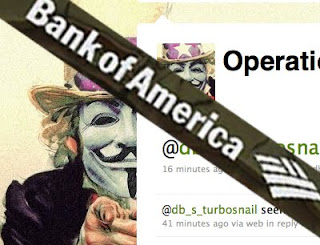 from business insider: Hacker group Anonymous (aka OperationLeaks on Twitter) just released what they say is a trove of damning documents on Bank of America. You can find them here: bankofamericasuck.com Remember, at this point, we can't verify whether they are legitimate or not, but Gawker's Adrien Chen, who has sources within Anonymous, suggest there's something real to the leaks. Anonymous says the emails deal with BofA's mortgage practices, but the source is not an employee of Bank of America proper - the source is a former employee from Balboa Insurance, a firm which used to be owned by BofA.