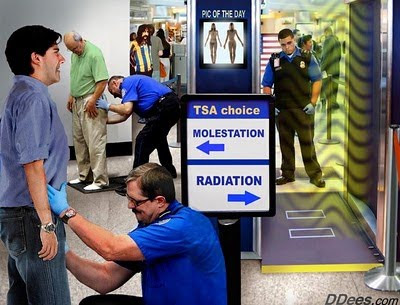 from the new american: Americans concerned about exposure to potentially dangerous levels of radiation from the Transportation Security Administration’s full-body scanners just got another reason to worry: USA Today reports that on March 11 the TSA announced “that it would retest every full-body X-ray scanner that emits ionizing radiation — 247 machines at 38 airports — after maintenance records on some of the devices showed radiation levels 10 times higher than expected.” The TSA, of course, insists that all the machines are safe and that the records indicating the high radiation levels are the result of recordkeeping errors by technicians. TSA spokesman Nicholas Kimball told USA Today that, for example, “the testing procedure calls for the technician to take 10 separate scans” for radiation levels, “add them up and then divide by 10 to take an average. They didn’t divide by 10.” In addition, says the paper, “even the highest readings listed on some of the records — the numbers that the TSA says were mistakes — appear to be many times less than what the agency says a person absorbs through one day of natural background radiation.”

related police state updates:
next step for airport security: scanners for your shoes*
napolitano 'not aware' of dhs link to atf gun-running*
fbi says 'sovereign citizen' cases on the rise*