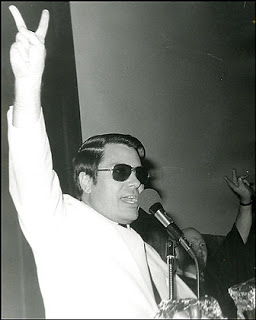 another look at jonestown

from washington post: Why did the followers of cult leader Jim Jones commit mass suicide in Jonestown, Guyana? In Stanley Nelson's "Jonestown: The Life and Death of Peoples Temple," the award-winning filmmaker looks at the events leading up to Nov. 18, 1978, when more than 900 Peoples Temple members drank cyanide-laced Kool-Aid and died en masse. What happened that day is etched in collective memory; knowing what happened before that changes the picture a bit...

The director found a wealth of material on Peoples Temple and Jones, from followers' home movies, photographs, newspapers, even audio recordings made by Jones and his followers. In fact, the film was inspired by a radio broadcast on the 25th anniversary of the suicide. "My wife and I heard some [former] members of Peoples Temple on the radio," he says. "We were so amazed by the story that they told," about how they joined Jones's church to find a racially integrated community, and that "they'd been able to live out their ideals."

That Jones preached racial integration, communal living and social justice comes as something of a surprise. The church ran well-appointed homes for its elderly members, provided health care for all and gave its members the sense of being part of a utopian social movement.

Nelson interviewed former Jones followers who speak candidly, at times with humor and joy, about their experiences in the church. Ultimately, Nelson says, he learned that "Peoples Temple really delivered on a lot of its promises: that people would live in an integrated community, that older people were taken care of."

Nelson says he didn't aggressively pursue former Jones followers. "I didn't want to play the evil producer and push people into an interview." After all, "there are people who have not told their kids, who have not even told their spouses."

Jones's fastidious archiving yielded a profusion of material. "Peoples Temple audio-recorded everything," Nelson says. "There were over 400 audio tapes of Jim Jones preaching, all the way up to the last day" -- and the infamous "death tape," in which Jones implores his followers to "go to sleep," to "die with a degree of dignity."

In the film's final scenes, those who survived the mass suicide -- because they were away from Jonestown that day or, like Tim Carter and Stanley Clayton, escaped into the jungle afterward -- describe losing their family members. In one heartbreaking scene, Carter recounts his wife and son dying in his arms, then says: "They were just [expletive] slaughtered. There was nothing dignified about it. It had nothing to do with revolutionary suicide. . . . It was just senseless waste."

Jonestown: The Life and Death of Peoples Temple is now playing at the Hollywood Theater.