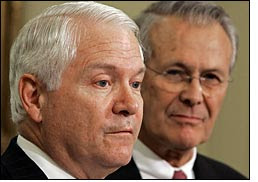 from kurt nimmo: “Robert Gates, the former CIA director and Texas A&M University president, is expected to easily win nomination as President Bush’s next defense secretary following a hearing today that is likely to focus on strategies in Iraq,” reports Express-News.

Easy nomination, no matter the guy is a criminal, not to mention a blood-thirsty warmongering psychopath.

Gates was at the core of the so-called Iran-Contra affair, but then it is business as usual in Washington, as the Bush administration is packed like a sardine tin with Iran-Contra criminals. Lawrence E. Walsh, the independent counsel in the Iran-Contra investigation, knew Gates was lying about his collaboration with fellow criminal, now respected Fox News talking head, Oliver North, the guy who wanted to suspend the Constitution and throw demonstrators in gulags under Rex-84. In 1984, as understudy and protégé of then CIA director-ghoul, William Casey, Gates wanted to bomb the dickens out of Nicaragua...

In many ways, Gates is a perfect choice for the neocons. “Gates was making it clear to analysts what intelligence they were to produce,” Thomas Blanton, director of the National Security Archive, tells the Los Angeles Times. “It’s a chilling record, because you have two main themes of the Iraq war present in Robert Gates’ career at CIA: the arrogance and bullying of a Rumsfeld and the intelligence cherry-picking of a Cheney.”