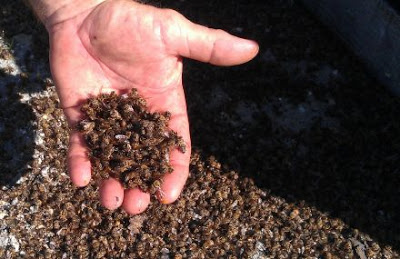 from cba/ap: Florida officials are abuzz as to how millions of honey bees were killed in Brevard County. Several beekeepers in the county have reported lost colonies this week. Charles Smith of Smith Family Honey Company told Stuart News Thursday he lost 400 beehives. He says the bees appeared to have been poisoned. “I’ll never get completely compensated for this unless someone handed me 400 beehives,” Smith told Stuart News. “I lost the bees, the ability to make honey and the ability to sell the bees.” Smith told Florida Today that he lost $150,000 from the incident. State officials are testing the bees to determine what type of chemicals contributed to their deaths. Experts say pesticides might be behind the lost beehives. “The fact that it was so widespread and so rapid, I think you can pretty much rule out disease,” Bill Kern, an entomologist with the University of Florida’s Research and Education Center, told Florida Today. “It happened essentially almost in one day. Usually diseases affect adults or the brood, you don’t have something that kills them both.” The case in Micco, 18 miles south of Melbourne, is being investigated by state agriculture officials and the sheriff’s office.