dhs warns that hackers may be motivated by #occupywallstreet 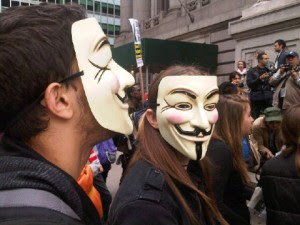 from mediaite: The “Occupy Wall Street” protests have been a way to fuel people’s anger at Wall Street, and the Department of Homeland Security is concerned such high-profile events may inspire hackers to once again target big financial institutions. Members of the group Anonymous have been seen at the protests, and those who have work the infamous Guy Fawkes mask have been arrested due to an obscure New York law banning masked gatherings. But a few days ago, hackers managed to collect the personal information of Goldman Sachs CEO Lloyd Blankfein. So Homeland Security issued a warning to big businesses that they could be next.

“While the DHS warning doesn’t mention Wall Street protests in particular, it did say that ‘publicized events‘ like Occupy Wall Street may motivate the group. Nevertheless, the agency wouldn’t weigh in on the ways it might monitor Anonymous’s involvement in Occupy Wall Street. ‘We don’t have any role in someone’s right to public protest,’ said a DHS official.

One member of the protests quoted in the above article expressed his doubts at the effectiveness and outcomes of Anonymous’ actions, but it’s clear its members only represent a fraction of the protestors.