another melamine-tainted milk scandal in china 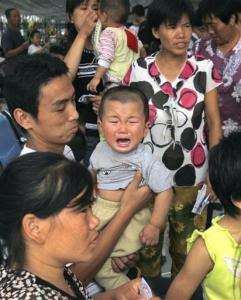 from ntdtv: A new milk safety scandal has broken out in China. Authorities in Shanghai have closed a dairy company and arrested three executives, after milk products were found to contain high levels of the toxic industrial chemical melamine.

According to the state-run Shanghai Daily, melamine was found in milk powder and condensed milk made by the Shanghai Panda Dairy Co. Ltd. Melamine is a toxic chemical used for making plastic. When added to food it can make the protein content appear higher, but it’s highly detrimental to human health.