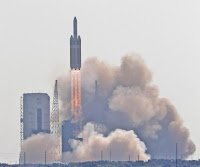 National Reconnaissance Office (NRO) launched yet another spy satellite. The NRO-15 lifted off on a Delta 4 Heavy rocket Friday morning at Cape Canaveral, Florida. It's the second spy satellite launch in just nine days and the third of four since April with the next one expected in August from Vandenberg AFB, California. The NRO holding true to its motto: "Vigilance From Above." Political analysts believe spy satellite launches represent fulfillment of Joint Vision 2020 - full spectrum dominance. A person can't help wonder if timetable connected to limited spy capabilities over Iran? The threat of losing drones, making missions too risky, filled with potential for embarrassment? You may drop below the fold to view Friday launch video.