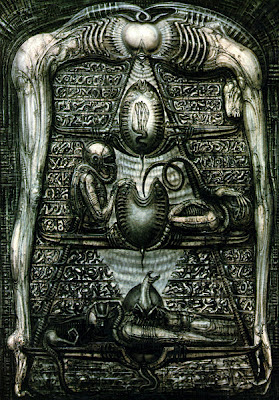 ‘Prometheus’ – A Lesson in Illuminati Religion

The movie Prometheus is more than a science fiction movie for special effects aficionados. "'Prometheus' - A Lesson in Illuminati Religion," a recent henryMAKOW.com blog entry suggests we're living in the times described by occultist Alice Bailey in book, "Externalization of the Hierarchy." The blog suspects we've entered an era where "...the satanic plan for humankind would not be the property of a few initiates, but would be promoted openly." The two important issues, in the movie, are transhumanism and the occult.  An interesting take on Illuminati viewpoint and their obsession to overcome death and human feebleness, the Illumined Ones want to be rid of yokes that are their human bodies and transhumanism provides solution:

"There is an interesting TED speech done for the promotion of the movie, where a young [CEO of Weyland Corp. Peter] Weyland says that we are now gods because we can create cybernetic life, like the man-like robot David.

This is a very common theme in all Illuminati-driven movies and music: cyborgs, nanotechnology medical bots, all kinds of improvements on the "imperfect" body that God gave us, especially reserved for those few who can afford it.

However, fast forwarding some 50 years to the time of the movie, we see that even with his science, Weyland is dying.

Cybernetics can only go so far, and if man wants to live forever, he needs to evolve his DNA. The Engineers were the ones who created humankind, so Weyland thinks that they are the key for the continuation of our evolution, our next "jump".

However, he is arrogant in his demand for eternal life and the Engineer kills him instead. One can't approach a god this way.

The first message is this: humankind can only take the next step in evolution when it complies with (worships) the Engineers' plans and intentions."

The conclusion reached with all of mankind's science at his disposal man remains mortal, the only way out is to change himself by changing his DNA.  The Illuminati want you to consent to genetic tampering.  Would you become just another deleterious genetically modified organism  (GMO)? The alien lifecycle (picture) by H. R. Giger reveals occult influence with a promiinent pyramid in drawing.

The blog reveals the tentacles in the film are connected to occult influences:

"H. R. Giger...the creator of the alien monster, is a self-professed Satanist, and his works, such as the Necronomicon, are blasphemous and pornographic...Giger is a member of the Swiss branch of Aleister Crowley's OTO, a Satanic organization. This did not stop [Director Ridley] Scott from saying that meeting Giger was the best thing that ever happened in his life. We just wonder what Giger taught Scott."

A disquieting counter creation theory gathering strength, and first popularized by Zecharia Sitchin, is notion mankind is little more than slave species created to relieve alien workers of physical toil.  The theory taken from records contained on ancient Sumerian cuneiform tablets, deciphered by Sitchin and others, that mankind is the creation of aliens called the Annunaki.  The humanoid Engineer figures in Prometheus imply heavily the nine ft. tall Annunaki.

The following blog excerpt illustrates religious message embedded in film and summarizes what lies ahead:

"Two particular scenes show the anti-Christian character of the movie. First, Jesus is depicted as an alien, who was sent to observe us but was instead killed.

That's why the punishing mission was started 2000 years ago. Ridley Scott confirmed this in interviews. Later, at the end of the movie, Liz, the Christian, takes back her crucifix necklace and is said to have had her faith returned.

In fact, she changed her faith, from a Jesus who is God, to a Jesus who is an alien. That's why she heads to the Engineer's planet, to meet this new Jesus.

So there we have it. Our real gods are aliens, and we need to drop our old religion and start worshiping them. Those who are worthy will receive a DNA boost that will make them become gods as they already are. This is the gift of Prometheus, the god who brought fire to humankind in a self-sacrificing manner."

Is this the real mark of the Beast? Is it a deception that results in a species with subtle but clearly diminished capacities?  It seems that has been goal with continuous assaults on our bodies from bad air, food, education and stressful pointless jobs?   The blog suggests the Illuminati directive:  "humankind can only take the next step in evolution when it complies with (worships) the Engineers' plans and intentions...[and]...only a few elect will be chosen to participate and lead the New World Order. Not everybody will merit the enhancements. In fact, most of humankind is useless and will have to be disposed of, especially if they don't agree to serve the masters." Will you accept genetic tampering if you somehow qualify? The conclusions in the blog seem justified with mounting crescendo in media about "some alien contact is on the way" and an apt warning about accepting mark: caveat emptor, i.e., buyer beware!  And usually the case when a sales pitch is accompanied by a massive campaign and hard sell, you don't want it!