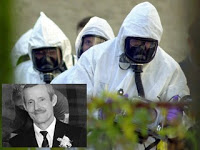 from iht: A month after the FBI declared that a U.S. Army scientist was the anthrax killer of 2001, leading members of Congress are demanding more information about the seven-year investigation, saying they do not think that the bureau has proved its case.

In a letter sent Friday to Robert Mueller 3rd, director of the Federal Bureau of Investigation, Democratic leaders of the House Judiciary Committee said that “important and lingering questions remain that are crucial for you to address, especially since there will never be a trial to examine the facts of the case.”

The scientist, Bruce Ivins, committed suicide in July, and Mueller is likely to face demands for additional answers about the anthrax case when he appears before the House and Senate Judiciary Committees on Sept. 16 and 17.

“My conclusion at this point is that it’s very much an open matter,” Senator Arlen Specter of Pennsylvania, the top Republican on the Senate committee, said of the strength of the case against Ivins, a microbiologist at the army’s biodefense laboratory who worked on anthrax vaccines. “There are some very serious questions that have yet to be answered and need to be made public.”

anthrax case to be reviewed by panel
from washington times: FBI Director Robert S. Mueller III told lawmakers Tuesday that an independent panel will review the science that the bureau relied on to conclude a troubled Army microbiologist carried out the 2001 anthrax attacks. “We’re in discussions with and are going to request the National Academy of Sciences review the work that was done in the course of this investigation,” Mr. Mueller testified before the House Judiciary Committee. “But as I say, the national academy is an independent entity and will be conducting a review.”

the fbi’s mail-sorting theory doesn’t add up
from george washington: The FBI claims that mail-sorting equipment crushed the killer anthrax in the letters to Senators Daschle and Leahy down to a fine powder. Is that possible? Well, the anthrax spores in the Daschle letter were 1.5 to 3 microns, according to the Washington Post. See also (this). There are 25,400 microns in an inch. Mail-sorting equipment is generally built to handle letters at least 1/4 inch thick. Correspondingly, U.S. Postal Service guidelines allow letters to be up to 1/4 of an inch thick.

Here is one of the U.S. Postal Service’s mail sorting machines which actually processed an anthrax letter in 2001 (although probably not the one which processed the Leahy and Daschle letters): What does this all mean? 1/4 of an inch equals 6,350 microns. So the FBI is trying to say that a mail-sorting machine which is designed to process letters 6,350 microns thick crushed something down to 3 microns . . . 2,116 times smaller than the type of envelope sorting machines are designed to handle. I don’t know about you, but my mail isn’t crushed into oblivion when I get it. On the other hand, the LA Times hints at a more likely explanation: “Since the early 1990s, U.S. Army scientists at Dugway Proving Ground in Utah have made small quantities of weapons-grade anthrax that is virtually identical to the powdery spores used in the bioterrorist attacks that have killed five people, government sources say.”

scientist concedes ‘honest mistake’ about weaponized anthrax
from latimes: An acclaimed government scientist who assisted the federal investigation of the 2001 anthrax mailings said Tuesday that he erred seven years ago when he told top Bush administration officials that material he examined probably had been altered to make it more deadly. The scientist, Peter B. Jahrling, had observed anthrax spores with the aid of an electron microscope at the government’s biological warfare research facility at Ft. Detrick, Md… “I believe I made an honest mistake,” Jahrling said in response to questions e-mailed to him for this article, adding that he had been “overly impressed” by what he thought he saw under the microscope. “I should never have ventured into this area,”

leahy: others involved in anthrax attacks 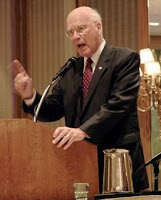 anthrax-case affidavits add to bizarre portrait of suspect
from nytimes: A judge unsealed a new batch of court documents in the anthrax case on Wednesday, filling in further details of the bizarre behavior of Bruce E. Ivins, the Army scientist who the F.B.I. has said carried out the letter attacks of 2001. Last September, according to a sworn statement from an F.B.I. agent, Dr. Ivins sent himself an exuberant e-mail message under the heading “Finally! I know Who mailed the anthrax!” He did not identify the perpetrator but said he was close to assembling the final proof. “I’m not looking forward to everybody getting dragged through the mud, but at least it will all be over,” Dr. Ivins wrote, adding, “I should have been a private eye!!!!” and signing the message “Bruce.”

ivins bragged to himself in an email that he knew anthrax killer
from raw replay: Bruce Ivins, the Army scientist accused of carrying out the 2001 anthrax attacks, e-mailed himself last year saying he knew who the killer was. According to an FBI affidavit, the e-mail was dated Sept. 2007. This video is from The Associated Press, broadcast September 25, 2008.

anthrax case stays open: why did the fbi let the ft detrick scientists investigate themselves?
from truthout: The Congressional anthrax hearings of September 16-17 revealed that public pressure is keeping the doors open in the anthrax case. FBI Director Robert Mueller promised that the FBI will provide their evidence to a panel of experts for scientific evaluation. The battle will now turn to the independence of this panel, and whether “all evidence” or merely “scientific evidence” will be under review.

During the hearings, Mueller found himself under fire by Senator Patrick Leahy and Congressman John Conyers for not having answers to their questions. Republican Arlen Specter was furious at Mueller for his unwillingness to assure them that Congress would have a role in determining the panel’s composition.

Meanwhile, new evidence shows just how deeply wrong ABC and Washington Post reporters have been over the years on their coverage of the anthrax attacks. They can’t have it both ways: Either they made repeated “mistakes” by relying on their sources, or several people deliberately lied in order to advance war on Iraq.

In his recent book Taking Heat, former White House secretary Ari Fleischer wrote that Bush was more shook up by the anthrax attacks than by any other event. White House officials repeatedly pressed Mueller to prove it was a second-wave assault by al-Qaeda or Iraq. After days of provocative statements designed to scare the American people, Cheney himself believed that he had been exposed to anthrax. Although the test results were negative, October 18, 2001, was the moment when Cheney decided to withdraw to an “undisclosed location” and carry biodefense protection during all of his mysterious travels.

fbi won’t release documents on anthrax suspect
from freep: The FBI is declining to release at least 15,000 pages of documents related to the now-deceased prime suspect in the 2001 anthrax attacks despite lingering suspicions that the bureau has accused the wrong man.

In August, the FBI and Justice Department identified Bruce Ivins, a former microbiologist at the U.S. Army’s biological weapons research center at Ft. Detrick, Md., as the “only person involved” in the attacks that killed five people.

But David Hardy, the section chief of the FBI’s records management division, notified McClatchy Newspapers that his office couldn’t immediately release the records because there were “investigative leads still open” and the FBI needed to withhold the documents to protect confidential sources, privacy, law enforcement techniques and a suspect’s right to a fair trial.

McClatchy had filed a request for the documents under the federal Freedom of Information Act, which generally permits the release of records of a dead person. Ivins committed suicide in July.

mailmen may deliver anti-anthrax drugs
from washington times: If there ever is another anthrax attack, the letter carrier may deliver your antibiotics. Federal health officials are beginning a project in Minneapolis-St. Paul to let letter carriers stockpile a personal supply of emergency antibiotics so they are protected and ready to deliver aid to the rest of the city at a moment’s notice.

“These letter carriers are being asked to put their lives on the line to help their communities,” Health and Human Services Secretary Michael Leavitt said Wednesday. By ensuring they are protected first, “the carriers can be ready on short notice to take to the streets.”

The project aims to overcome a big hurdle of emergency planning. The government has much drugs stockpiled in case of future bioterrorism, but few ways to get them quickly to panicked citizens. Leavitt noted that if someone possibly has inhaled anthrax, the chances of survival are best if antibiotic treatment begins within 48 hours.