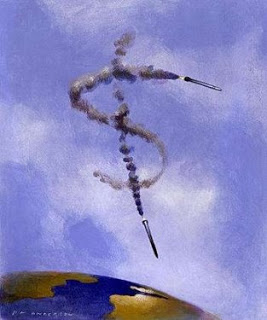 with all eyes on the bailout, house passes trillion-dollar defense bill

from alternet: On Wednesday, the House passed a mammoth defense bill by a 392-39 vote. It's expected to clear the Senate with little difficulty next week.

It was part of a trillion-dollar stop-gap measure to keep programs running through next March, allowing lawmakers to skip town without passing a final budget. The Associated Press reports, "The legislation came together in a remarkably secret process that concentrated decision-making power in the hands of a few lawmakers."

In keeping with the tradition of recent years, Bush held a gun to his own head and threatened to pull the trigger if his demands weren't met. According to the AP, "To earn President Bush's signature rather than a veto, House and Senate negotiators dropped several provisions he opposed. They include a ban on private interrogators in U.S. military detention facilities and what would have amounted to congressional veto power over a security pact with Iraq."In other words, Congress also maintained recent tradition, swearing not to give Bush a blank check and then whipping out their pens and signing a blank check.

The number that the House sent to the Senate for "defense" -- $612 billion for the coming year -- is eye-popping. Imagine a stack of 612,000 million-dollar bills. Quite a pile.

That number's a sham, however. The budget calls for $68.6 billion for the occupations of Iraq and Afghanistan in 2009. War costs this year totaled $182 billion, according to the Federation of American Scientists.

The House passed the Brobdingnagian spending measure 11 months after George W. Bush vetoed a bill - one passed with a lot of bipartisan support - that would have added $7 billion measly dollars per year to the State Children's Health Insurance Program, covering 4 million more uninsured children. You'd be hard-pressed to find a clearer sign of national psychosis.